The moose is the largest of all deer species, standing about five to six and a half feet tall. Males (called bulls) are immediately distinguishable by their iconic antlers, which can spread almost two metres long. In the fall males and females bellow loudly to each other. Females give birth to one or two calves, weighing around 30 pounds each, in the spring. 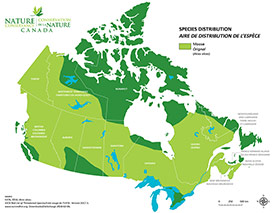 Around the world, moose can be found across northern Europe and Asia, as well as throughout North America. In Canada moose can be found in almost every region, excluding the Arctic and Vancouver Island, with an abundance in Newfoundland after a few pairs were introduced to the island in the early 1900s. Moose tend to live close to water sources such as the lakes, muskegs and streams of the boreal forest. In the winter, they will occupy forests with reduced snow levels to more easily find food.

What do moose eat?

In the winter, moose will snack on various shrubs and pinecones. They often use their hooves to scrape snow in areas with mosses and lichens, to satisfy their herbivore diet. Due to their height, moose prefer to browse in higher grasses and shrubs since lifting and lowering their head can be strenuous when feeding. In the summer, moose feed on aquatic plants both on and below the water’s surface. Despite their large size, moose are good swimmers and have been observed keeping afloat for several miles at a time. In addition to swimming to find food, moose will swim to beat the heat in the summer.

What is the species' conservation status in Canada?

Although they are among the largest mammals in Canada, moose populations are threatened by habitat loss and degradation. As development moves deeper into wilderness areas, it breaks up the large tracts of the moose’s habitat. The moose population is abundant in some areas of Canada such as New Brunswick and Newfoundland, but is endangered in mainland Nova Scotia.

Despite a healthy moose population of more than 29,000 in New Brunswick, moose are considered endangered on the neighbouring mainland Nova Scotia. The Nature Conservancy of Canada (NCC) has embarked in a project to help wide-ranging species such as moose travel from New Brunswick to Nova Scotia.

The Chignecto Isthmus, a narrow stretch of land that is the only route for species to migrate in and out of Nova Scotia, has become a pivotal factor in the rehabilitation of the species. As of December 2015, NCC has currently secured close to 20 properties in the Chignecto Isthmus to ensure moose can travel safely between provinces. Ensuring the possibility for moose movement between NB and NS by protecting land and removing the possibility of land conversion is one of the strategies required for ensuring moose have a future in NS.

Moose is one of 25 species or landscape options that can be symbolically adopted through NCC’s Gifts of Canadian Nature gift-giving program, that contributes to critical conservation work across the country.

Your gift will help care for habitat that moose and other species rely on for their survival.

Ever wondered why the plural of moose is not meese? Find out here.