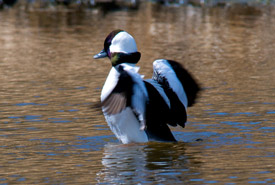 While Important Bird and Biodiversity Areas (IBAs) are a global initiative and have designated areas across the world, Migratory Bird Sanctuaries occur only in Canada and are managed by the Canadian Wildlife Service. As part of the Migratory Birds Conservation Act, the first MBS was officially designated in Quebec in 1919. Before that, the first migratory bird protected area was established by the Government of Canada in 1887. Officially designated in 1921, Last Mountain Lake in southern Saskatchewan was the first migratory bird sanctuary in North America. To this day, it remains a haven for migratory and breeding birds.

MBS are recognized in areas that are important for bird conservation, such as for seasonal congregations and rare species. Another reason a MBS may be established is if bird populations become vulnerable to area-specific threats. Threats can include hunting, or development, in habitats where nesting, moulting, wintering or staging occur. These areas help to protect migratory birds by conserving their habitat and making it illegal to hunt or disturb them.

There are currently 92 MBS across Canada, 19 of which are located on or within five kilometres of NCC-conserved properties. NCC is working to protect habitat for migratory birds on the island of Grand Manan, where the 433-hectare (1,070-acre) Grand Manan Migratory Bird Sanctuary is located. By conserving this area, NCC is protecting vital habitat for species, such as bufflehead, sanderling and green-winged teal.