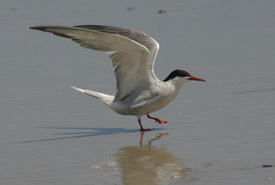 A tern is like a small gull, only much more elegant and streamlined. Terns swoop and dive into water to feed on small fish. A common tern in breeding plumage has a grey back and wings, white chest, a black cap on the head and a red/orange bill. The black tip on the tern's bill distinguishes it from the similar-looking Arctic tern. 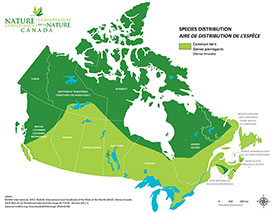 Where is the common tern found?

The most widespread tern species in North America, common terns breed across most of Canada — from Newfoundland to Alberta and from Labrador down the Atlantic coast into the U.S. The birds nest around lakes, rivers, marshes and oceans. At the end of the summer they migrate to South America, to spend the winter along the coasts.

What is the common tern's conservation status?

Common tern populations decreased significantly in the late 19th century due to the millinery trade to make hats, but they have recovered with protection. They declined again in the 1970s, likely due to pollution and increase in populations of large predatory gulls in the northeast.

There has been recovery since then but the terns are not back up to historical numbers. Overall, the population in Canada appears to now be stable although there have been declines around the Great Lakes (Morris et al., 2012). Increasingly, coastal common terns are becoming concentrated in a few well-protected colonies.

What is NCC doing to protect the common tern's habitat?

The Nature Conservancy of Canada has protected breeding colony habitat for common terns, such as Tern Island in the Tabusintac Estuary, New Brunswick, which supports the second-largest common tern colony in Atlantic Canada.