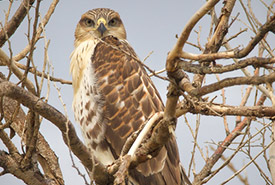 Ferruginous hawks, among the biggest hawks in North America, are migratory birds with reddish-brown feathers and sharp talons that you don’t want to get caught in. These birds have been known to reach top speeds of 160 kilometres per hour when diving for prey. They depend on grasslands to survive: an ecosystem on the brink of being wiped out in Canada.

Both male and female ferruginous hawks are identical in terms of markings, colours and feathers. However, if you’re lucky enough to see one of these birds up close, you’ll notice that females are slightly larger. Identifying a ferruginous hawk from below is easiest: its underbelly is stark white and its wing tips are rust-coloured.

As with all hawks, ferruginous hawks have a wingspan between 133 to 142 centimetres and a small head. There is a less common, darker colour variant, which is covered in dark-brown feathers and has a light pinkish-grey tail. Something that separates ferruginous hawk from other predatory birds is its feathered legs: its feathered underside stretches all the way down to its talons. 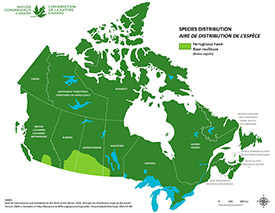 Where does the ferruginous hawk live?

Ferruginous hawks can be found in central-west regions of North America; in Canada, this means areas like southern Alberta and southern Saskatchewan during the summer breeding season. Birds that breed on the Canadian Prairies migrate south for the winter and spend the cooler months from Colorado south to central Mexico.

What is the ferruginous hawk's conservation status?

Currently, ferruginous hawk is designated as special concern by the Committee on the Status of Endangered Wildlife in Canada. This means that there is a risk that it could “become threatened or endangered because of a combination of biological characteristics and identified threats.” However, this is not the first time the ferruginous hawk has faced significant threat: between 1980 and 2021, it was constantly designated either as threatened or special concern.

Its current special concern status has been in place since May 2021, primarily due to habitat loss and degradation, and industrial development.

What is NCC doing to protect the ferruginous hawk's habitat?

The ferruginous hawk is native to Canada’s grassland habitats throughout the southern Prairie provinces. Declining hawk populations can be attributed to increased human disturbance, habitat loss and degradation, and a decrease in overall available prey.

NCC is working to protect grasslands, which is one of the most at-risk ecosystem in the world. Countless species depend on this habitat for survival. Over 80 per cent of Canada’s natural prairie grasslands have been destroyed. To protect this ecosystem, NCC uses science and research to pinpoint where to focus our conservation efforts. Take a look at NCC’s region-specific work in the Prairies here.