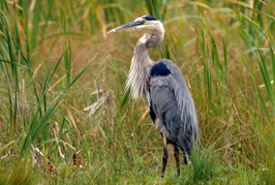 This colonial-nesting waterbird is characterized by its long neck, long legs and short tail, and a greyish-blue upper body with black and white markings on its crown and under parts.

What does the great blue heron eat?

Measuring more than one metre in height, the great blue heron's stilt-like legs are essential for foraging in shallow waters where the birds feed on fishes and frogs. On land, being a generalist and opportunistic species, great blue herons may hunt for salamanders, smaller birds, reptiles, other small mammals  and large insects. 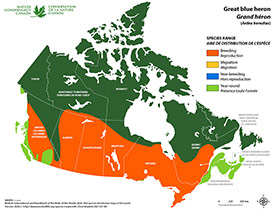 Where does the great blue heron live?

Great blue herons occur across all of southern Canada and there are five recognized subspecies. The subspecies present in Ontario is considered a short-distance migrant and can be found in many habitats, from southern wetlands to northern boreal forests, provided a nearby water source is present.

What is the great blue heron's conservation status?

In North America, the great blue heron is considered secure. However, the fannini subspecies in British Columbia is listed as a subspecies of special concern by the Committee on the Status of Endangered Wildlife in Canada. Humans are this bird's biggest threat.

When nesting sites are disturbed by human activity, adult herons leave eggs and nestlings unguarded, making them vulnerable to predation by bald eagles and other predatory birds. In addition, adequate nesting sites are becoming limited due to development in the province. High levels of industrial contaminants have been a threat to this species, reducing both reproductive success and survival.

What is NCC doing to protect the great blue heron's habitat?

In Ontario, the Minesing Wetlands provide ideal breeding grounds for great blue herons and are home to one of the largest and oldest known colonies in the province, with more than 200 active nests.

In Saskatchewan, great blue heron has been observed on all of NCC’s natural areas, including Big Valley, Meeting Lake and Saskairie.

To read more about the great blue heron and to listen to its distinctive goose-like call, visit: