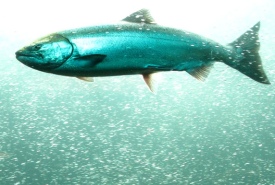 Pacific salmon have some of the most complex life cycles of any species on Earth. They are anadromous, meaning their eggs are laid and hatch in fresh water. Their young spend at least some of their early lives in fresh water before swimming to the sea to grow and mature.

One of the most remarkable things about Pacific salmon is their ability to find their way home again when it is time to reproduce. They have been known to travel thousands of kilometres in the ocean. Once inland, they battle strong currents and waterfalls to reach their hatching places. 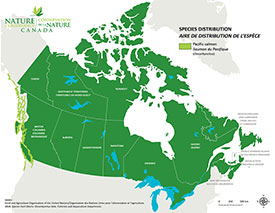 There are five species of Pacific salmon in British Columbia:

Each year, these species transfer crucial nutrients from marine to fresh water and terrestrial environments during their annual migration to their natal streams, where they spawn and die. Nitrogen, phosphorous and carbon are delivered to rivers, estuaries and riparian (riverbank) zones through the decomposition and predation of spawned salmon. These nutrients are important building blocks in these freshwater and terrestrial ecosystems. As a result, salmon help maintain the productivity of river corridors and associated forest ecosystems throughout BC.

Chinook, chum, coho, pink and sockeye salmon are also critical to coastal ecosystems. They are desirable food sources for a wide range of species, from microscopic invertebrates to large vertebrate carnivores, such as grizzly and black bears.

What is NCC doing to help protect habitat for this species?

The Nature Conservancy of Canada (NCC) has listed these five species of Pacific salmon as key focal species within all of its BC Region Conservation Blueprints, not only because of their highly specialized life histories but also because they play a critical role in the integrity of BC's marine, freshwater and terrestrial ecosystems.

In addition, NCC has worked with the Department of Fisheries and Oceans to develop conservation units for Pacific salmon species in BC and the Yukon.

Campbell River Estuary - A former industrial mud pit, the site is now teeming with life again thanks to work done by NCC and its partners.

Kumdis Estuary - A unique environment, rich in biodiversity, which has led scientists to refer to the area as the "Galapagos of the North."

Koeye Estuary - One of the most outstanding estuaries in British Columbia, Koeye features ideal habitat for salmon.