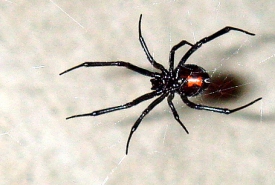 A female black widow spider (Photo from the Wikipedia Commons)

Generally, only females are cause for concern. Even then the small amount of venom they produce gets quickly diluted by the human body. A black widow bite can, however, cause severe pain at the bite site and lead to painful muscle contractions. Although these bites are generally not life-threatening for healthy adults, medical attention should always be sought following a black widow bite — particularly for children and the elderly.

Now that we've allayed your fears (we hope!), read on and learn more about this amazing arachnid.

It's all in the name

Aside from being a popular comic book character, the black widow spider is notoriously known — and named — for the behaviour of its females. While humans may have little to fear, the same cannot be said for a female black widow's mate. In some cases, females kill and eat their partner after mating.

Sexual cannibalism, as it's called, may serve a greater purpose. Females who eat males have been found to have healthier broods. A male benefits by giving its offspring a better chance of survival. But it may not be all about selfless sacrifice. Recent studies showed that males could sense hungrier females and avoid them. By using scent receptors in their feet, males could tell from a female's web if she was likely to eat him and choose a safe mate.

But with behaviour like that, it shouldn't be much of a surprise that offspring are cannibalistic too, eating each other as they hatch from their eggs.

While the common image of the black widow is its all-black body, eight spindly legs and signature red hourglass boldly displayed across its abdomen, that description is strictly for the ladies.

Males are about half the size of a female, and are brown or grey in colour with varied markings, including white stripes and red spots. Juveniles meanwhile develop a mixed colouration of orange, brown and white.

Fact: there are five different species of black widow found across North America.

Where, oh where, can they be? 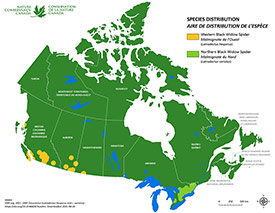 Black widows are found in the southernmost regions of at least five provinces in Canada, from BC across to Ontario and across the continental U.S. The largest population in Canada is found in Ontario.

Given its need for a warmer climate, the black widow's distribution is not surprising since Ontario dips farther south than any other Canadian province.

You can rest assured you're unlikely to find them in your home, at least. Black widows prefer dark, sheltered spots close to the ground, such as wood, trash or rock piles, or even underneath a house. Here, they spin funnel-shaped webs to catch their insect prey.

The key to relationships is communication

The webs of black widows aren't just for catching dinner. They also come in handy to communicate with mates. When looking for a partner, male black widows will vibrate the silky ends of a female's web to alert them of the male's presence. Only after a complicated dance by the male, and if a female accepts, will they mate. The female then lays 50 to 100 eggs, wrapped in silk for protection, and 30 days later the spiderlings hatch.

Just one bite, and its prey melts...literally

The venom of black widow spiders is actually 15 times stronger than that of rattlesnakes. Fortunately for people, black widow spiders bite only when disturbed and often do not inject venom. However, this is still bad news for bugs. Smaller insects that get caught in the spider's web are paralyzed with venom and carried home for dinner. Black widows use an enzyme to help them digest their victims, leaving only empty carcasses.