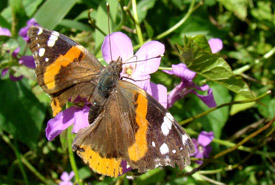 The distinctive black, orange and white red admiral is one of the most commonly seen butterflies, with a range extending from New Zealand to North America. It is a mid-sized butterfly with a wingspan of four to eight centimetres. The red admiral feeds on a variety of foods including sap, nettle, hops, fermenting fruit and even bird droppings.

Unlike the monarch, there is no single overwintering location known for the red admiral. During migrations, the red admiral can be found in almost any habitat from tundra to the subtropics. In Canada migrants are usually seen in May and occasionally the butterfly will overwinter successfully in Canada in mild winters.

The red admiral makes its home in a wide variety of habitats, including clearings, woods, vacant lots, gardens and even urban areas. However these small lepidoptera are known to vigorously defend their territory against other males of their kind, choosing exposed hilltops and tree trunks as lookout points.

While an internationally common species, the red admiral still needs safe places to land and feed. The Nature Conservancy of Canada (NCC) works to protect natural spaces so that common and at-risk species alike have habitat in which to thrive.