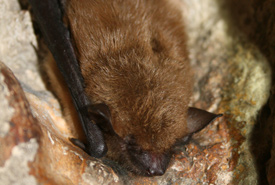 The big brown bat, one of 18 bat species in Canada, is the most common and abundant bat in North America. This species has uniform brown fur, measures nine to 14 centimetres in length, weighs 11 to 25 grams and has a wing span of 32 to 35 centimetres. Its muzzle, wing membranes and ears are black. Generally, females are slightly larger than males. 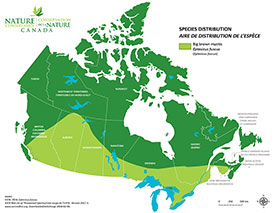 The big brown bat ranges from southern Canada (including BC, Alberta, Saskatchewan, Manitoba, Ontario, Quebec and New Brunswick) to Colombia and Venezuela. It is also found in Alaska and parts of the Caribbean. This species is found in various habitats, but is more common in areas of mostly deciduous forest.

As this species is well adapted to human presence, it is commonly found in cities, both large and small, often roosting in buildings. During winter, it mainly hibernates in houses, barns, churches, storm sewers and mines. Some big brown bats, however, still hibernate in caves, tree cavities and rock crevices.

Fortunately, the big brown bat’s global conservation status is least concern. It is not at risk of extinction. This species still faces some threats, including conflict with humans, since it often roosts in human-made structures. Other threats include the build-up of toxins, such as pesticides, in its body, as well as white-nose syndrome, a fungus that infects the exposed skin of hibernating bats’ muzzles and wings. White-nose syndrome causes bats to use more energy than they can afford during hibernation and to wake up more frequently than healthy bats, often leading to death. Because the big brown bat frequently hibernates in fairly warm buildings, it is less susceptible to white nose syndrome than other bat species.

The big brown bat occurs in several natural areas where the Nature Conservancy of Canada (NCC) has properties, including the Rocky Mountain Trench and West Kootenay in British Columbia and Happy Valley Forest, Ottawa Valley, Rice Lake Plains and Southern Norfolk Sand Plain in Ontario. In Quebec, they can be found in the northern Green Mountains. In Saskatchewan, this species occurs in East Parklands, Milk River Basin, West Boreal Transition, Upper Qu’Appelle, West Parklands and Moose Mountain. By protecting parts of these natural areas, NCC is helping to create viable habitat where bats can hibernate, forage and raise their young.

This species also occurs in Alberta and Manitoba. However NCC has not yet conducted bat-specific surveys in these provinces. Although the big brown bat has been detected on properties in BC, it is unlikely that it is hibernating in these areas, as underground caves or mines with stable temperatures are not known to occur on these properties. However, it may roost in tree cavities the rest of the year.