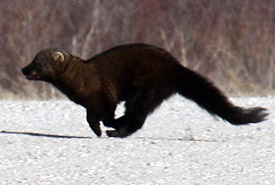 The fisher is a solitary, wide-ranging mammal. A member of the weasel family, the fisher lives in coniferous habitats across much of Canada and the northern U.S. 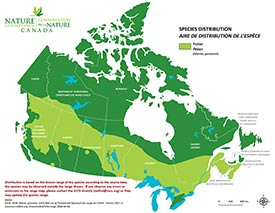 Fishers prefer mature forests with access to water, and avoid open areas. Primarily nocturnal, the fisher usually spends its days sleeping in hollow trees or logs, but it will occasionally venture out in daylight.

But the fisher is not above feasting on reptiles, carrion and fruits. Fishers are year-round hunters, active throughout Canadian winters.

Although not a usual staple for carnivores, a porcupine can easily feed a fisher for two days.

Fishers will follow a porcupine up a tree, overtaking it, and then attack the porcupine from above. The fisher's ability to descend trees head-first, aided by its retractable claws, helps it to approach the porcupine stealthily, attacking the only quill-free spot on its body — the face.

Fishers mate in spring and have a one-year gestation period, including an 11-month delay before implantation. Fishers give birth to an average of three kits in March or April. Kits are weaned after four months and families break up in autumn.

The fisher's original range was severely reduced throughout the late 1800s and early 1900s through over-trapping, pest control and habitat modification (logging, fire and farming). NatureServe lists both the fisher's threat severity and immediacy as high.

Due to habitat loss and fragmentation, fishers may venture into urban areas, where they will seek out food. Restricting access to garbage, pet foods, pets and domestic fowl (especially at night) will help avoid negative interactions with these animals. It is also wise to leave fishers alone as they can react aggressively when startled. Fishers are an important part of our native wildlife. By respecting them and taking simple precautions, humans and fishers can live side by side.

In Canada the fisher is considered secure and can be found in many of Nature Conservancy of Canada's (NCC's) natural areas, including the Frontenac Arch, Northern Bruce Peninsula and Riding Mountain which provide movement corridors for wide-ranging mammals.

By maintaining these habitats the NCC can help protect the fisher's status in Canada.