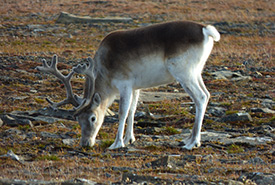 In June 2020, the Nature Conservancy of Canada (NCC) and NatureServe Canada released Ours to Save, a report on more than 300 plants and animals unique to Canada, including Peary caribou. This report, the first of its kind, will help guide conservation work to protect wildlife endemic to Canada.

Named for polar explorer Robert Peary, this subspecies of caribou is the smallest in North America, reaching an average of 90 centimetres at shoulder height, and 110 kilograms in weight for males and 60 kilograms for females.

Peary caribou have a mostly white coat in winter, which changes to grey in summer. Its dense coat and smaller size, which conserve heat, are adaptations that help Peary caribou survive harsh Arctic winters. This subspecies also has wide, sharp hooves to navigate and forage in snow.

Both sexes grow antlers, with the males having larger ones. Unlike other caribou, the velvet covering on Peary caribou antlers is grey. 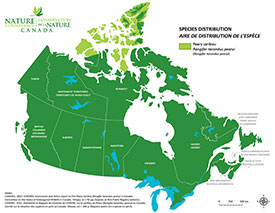 Peary caribou are found in Arctic tundra habitat on islands in the Canadian Arctic Archipelago, in the Northwest Territories and Nunavut.

Feeding on sedges, grasses, willow and mosses, Peary caribou are versatile foragers. This subspecies travels long distances annually between feeding grounds and is typically found in small groups of no more than 12.

What’s the difference between caribou and reindeer?

What is this subspecies’ conservation status?

Peary caribou has been assessed as threatened by the Committee on the Status of Endangered Wildlife in Canada. The population has declined since surveying began in the 1960s. Peary caribou habitat is threatened by climate change, which may cause an increase in severe weather events and a reduction in sea ice, impacting migration and movement patterns.