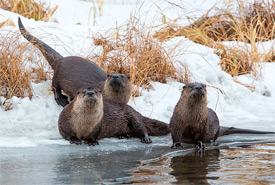 River otters can measure up to 1.4 metres in length from nose to tail, and weigh up to 14 kilograms. They have brown, water-repellent fur, webbed feet and long, strong tails that help propel them through water. Their underbody is usually lighter in colour. Their tiny ears close under water, and their thick fur helps keep them warm in cold water. Long whiskers help them find prey such as fish, clams, insects and other aquatic animals. 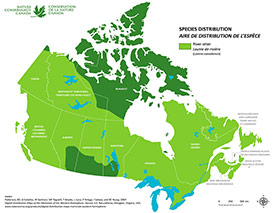 River otters can be found throughout North America. In Canada, they are found in every province and territory, but have only recently returned to Prince Edward Island after disappearing at the beginning of the 20th century.

They can live in a variety of different aquatic habitats, including rivers, lakes and large creeks. They also thrive outside of water and can sometimes be seen playing in snow or sliding down muddy hills. Playing helps strengthen social bonds and practice hunting skills.

Their burrows are typically found near water and are often built to be accessible from both on land and in the water.

River otters breed between late winter and early spring. Although they are able to reproduce annually, it is more likely for this species to give birth every two years. Female otters give birth to between one and six pups (usually two to three). The pups are born blind and spend the first month of their lives in their dens with the female. After two months, the female teaches the now sighted pups how to swim.

This species does not hibernate and remains active under frozen water by breathing through breaks in the ice. River otters are able to hold their breath underwater for up to eight minutes.

River otter populations declined significantly throughout the late 1800s due to over-harvesting and water pollution. However, through conservation management and reintroduction efforts, populations have recuperated and are now considered stable or increasing.