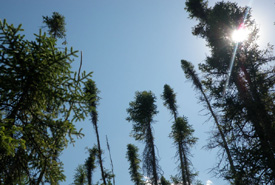 Black spruce trees can reach heights of up to 30 metres and diameters of 23 to 36 centimetres. The top of a typical black spruce consists of a cluster of branches.

The black spruce’s short, stiff, blue-green needles along its drooping branches are arranged in every direction on the tree's twigs. Its pine cones are small, purplish-brown and egg-shaped. They can remain on a tree for up to 30 years. Black spruce trees have thin, scaly, dark greenish-brown bark. 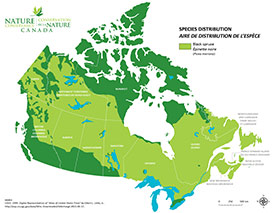 Black spruce trees occur across the boreal region of North America, ranging from Newfoundland and Labrador, to New Jersey, to inland Alaska. More than 80 per cent of its global range is in Canada. Black spruce typically grow in cold, soggy areas, such as bogs and swamps, but also in upland areas.

Being a semi-serotinous species, black spruce cones readily open and disperse seeds after wildfires. It also reproduces through layering, which occurs when the lower branches touch the ground and put down roots that then send up new stems. This strategy enables the species to reproduce in harsh environments where other trees cannot live.

Black spruce play many important roles in an ecosystem and is one of the dominant trees in Canada’s boreal forest. For example, when its branches are covered with snow, they provide thermal cover for animals, such as woodland caribou. Its seeds are also the primary food source for red squirrels, chickadees, nuthatches and crossbills, while snowshoe hares, mice and voles eat the seedlings and spruce grouse feed on the needles. Birds, such as ruby-crowned kinglet and palm warbler, nest in black spruce trees.

Fortunately, black spruce is widespread and abundant, with a stable population trend, according to the International Union for Conservation of Nature. Black spruce is the provincial tree of Newfoundland and Labrador.