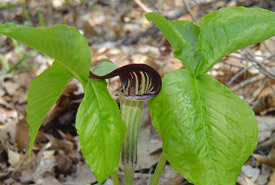 Jack-in-the-pulpit is named because it resembles a preacher standing in a pulpit.

The spathe, a sheath-like leaf, overhangs the Jack like a hood, keeping the pollen on the tiny flowers at the base of the flower spike (or spadix) from being washed away by spring rains. It has large leaves on long stems.

Jacks can often be seen in early spring in moist woodland habitats bursting from the forest floor. The plant forms clusters of red berries in late summer and lingers into fall. Its root resembles a small white turnip and was used by First Nations people for relief from bowel and stomach illness.

Jack-in-the-pulpit could also be named Jill-in-the-pulpit or just in-the-pulpit, after the way it can display male, female or nonsexual traits in any given year. If a large female plant has an abundant fruit production one year, it may only grow one leaf the next year and take on male traits. A male plant may have an exceptional growing year and take on female traits, including more leaves, the next year. Only larger, female plants are able to produce berries. 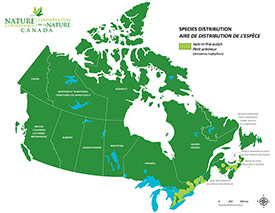 Jack-in-the-pulpit is abundant in its range throughout Ontario, Quebec and the Maritimes.

This species is considered imperiled only at the western edge of its range in Manitoba. Although apparently secure, Jack-in-the-pulpit is facing increased threats from invasive alien species, such as garlic mustard and buckthorn, which are increasingly encroaching in Canada's eastern woodland habitats.

Diligent land management work at forests that the Nature Conservancy of Canada (NCC) has helped to conserve throughout its range helps to protect woodland habitat for Jack-in-the-pulpit and other forest plants and animals.