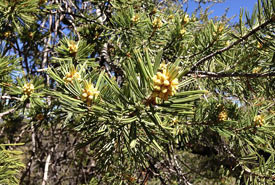 Limber pine (also known as Rocky Mountain white pine) is a species of white pine, typically found in the montane and subalpine natural sub-regions of the Rocky Mountains. This species is widespread in the western United States, and in certain regions of western Mexico. Populations, however, can be sparse and in isolated pockets. It is at the northern limit of its range in British Columbia and Alberta. 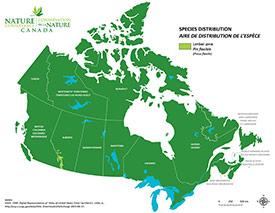 Limber pines can live for more than 1,000 years under ideal ecological conditions, and don’t reach maturity until they are about 50 years old.

Limber pine is a low- to mid-elevation species that often populates the treeline on its own, or at times in stands with whitebark pine and other conifer species.

Limber pine is distinguishable from whitebark pine by its larger cones, which are yellowish-brown and cylindrical, measuring 8-20 centimetres in length, with thickened scales towards the tip. Lower branches on older trees can be very long and drooping, with upturned tips and needles in bunches of five. 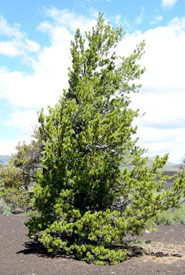 Under ideal conditions, limber pines can grow 12 to 15 metres tall. Because they often grow in exposed areas such as the steep and rocky terrain of the Rocky Mountains, limber pine typically grows less than three metres in height.

What is the species’ ecological role?

As a keystone species found in low- to mid-elevation landscapes throughout western Alberta, limber pine is an important food source for many species. Its seed caches are a food source for small mammals, birds and bears. Specifically, the diet of Clark’s nutcracker is made up mainly from the seeds of whitebark and limber pine. Its cones also serve as a high-fat food source for black bears, grizzly bears, chipmunks and red squirrels.

There is anecdotal information of limber pine seeds being used as a food source for early European settlers and Native Americans.

Limber pine officially became an endangered species in Canada in November 2014. Its Canadian range has been severely affected due to a number of threats, including mountain pine beetle and white pine blister rust, habitat destruction and fire suppression.

In 2009, surveys conducted at some sites with limber pine in BC recorded close to 45 per cent of trees infected and 35 per cent of trees dead. Based on these surveys, it is expected that an estimated two-thirds of mature individuals may be lost in the next century.

The Nature Conservancy of Canada (NCC) is involved in conservation work on several properties throughout southwestern Alberta along the eastern slopes of the Rocky Mountains, where stands of limber pine exist. This species is found on the exposed ridges of many projects in southwestern Alberta, including the Waldron Ranch, King Ranch and OH Ranch.