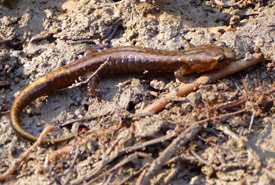 Allegheny mountain dusky salamander is slim and small, and ranges from seven to 10 centimetres in length. Adults typically have light stripes extending down their backs, from head to tail, often with a row of chevron-shaped dark spots down the middle. Stripe colour is age- and sex-dependent, and can be yellow, orange, red, tan or brown. This amphibian also has speckled sides and a dark brown or black belly. 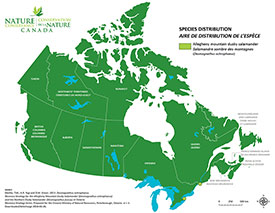 Allegheny mountain dusky salamander is found in eastern North America’s Appalachian Mountain System, from the Canada-U.S. border in the north to northern Georgia in the south. In Canada, it only occurs in two small areas: the Great Lakes/St. Lawrence sub-population in Covey Hill, Quebec, and the Carolinian sub-population in Ontario’s Niagara Escarpment.

This salamander lives near forested streams, springs, mountain cascades or seeps (areas where groundwater surfaces to create pools). It nests underground in cavities near seeps or in shallow depressions in moist soil underneath stones, leaf litter, stumps, logs or moss.

Although Allegheny mountain dusky salamander has been ranked as least concern globally, it has been assessed as endangered by the Committee on the Status of Endangered Wildlife in Canada. Threats to this species include habitat loss, human disturbance and uncontrolled stormwater runoff, which may contaminate water sources and make nearby slopes unstable, making this amphibian susceptible to mudslides and rock falls.

The Nature Conservancy of Canada (NCC) has helped protect 533 hectares (1,300 acres) in Covey Hill, Quebec. A natural laboratory has been set up on-site, where several aspects of the environment, like the region’s unique hydrology, are studied in partnership with many universities, including the Université du Québec à Montréal.