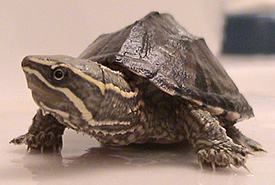 Sometimes referred to as the "stinkpot" turtle, this species emits a strong odour, especially when it is frightened.

These are small freshwater turtles measuring a maximum length of 14 centimetres. Their arched, narrow carapaces are gray, brown or black. Musk turtles can be identified by the two light stripes on either side of their head and two fleshy barbels under the chin, similar to a catfish. 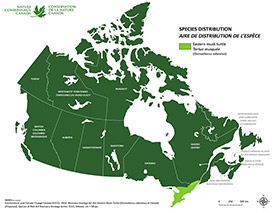 Eastern musk turtles can be found in southern Ontario and some areas in Quebec. They live in shallow rivers, lakes and ponds with a slow current and soft bottom.

Musk turtles are listed as threatened.