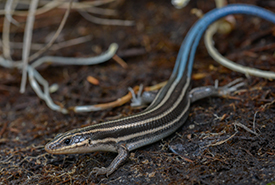 Smooth-skinned with a greenish-black body, the five-lined skink can grow up 20 centimetres in length. Juveniles have a bright blue tail and five creamy-coloured lines along their back. This colour and patterning fades as they mature. During breeding season, the chin and jaw of adult males become bright orange. 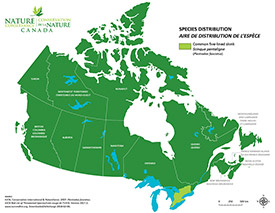 In Canada, this species is found exclusively in southern Ontario. In the U.S., its range extends from the Northeast and Midwest to the Gulf Coast in the south.

Five-lined skink, Ontario’s only native lizard species, is split into two distinct populations. The Great Lakes / St. Lawrence population is found from eastern Ontario to the Georgian Bay coast, and the Carolinian population occurs along the Lake Erie shoreline.

Forests, wetlands, sandy beaches and meadows provide habitat for this species. It is often found basking in places with rocky outcrops or logs and where sunlight reaches the ground.

Active hunters, five-lined skinks feed on invertebrates such as flies, spiders and crickets. This species is preyed upon by small mammals, snakes and birds. When attacked, a five-lined skink’s tail can detach, allowing it to escape. In some cases, the tail may eventually re-grow.

In 2019, the Nature Conservancy of Canada (NCC) expanded the protection of the Frontenac Arch, a land conservation project in eastern Ontario. This biodiverse area of forest, wetlands and granite ridges includes the Leland Wetlands, a habitat for five-lined skink. NCC has also protected and restored habitat for this species in the Essex Forests and Wetlands Natural Area and the Eastern Georgian Bay Coast Natural Area.