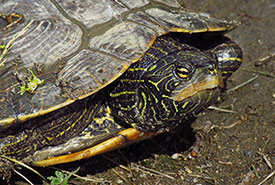 This large freshwater turtle grows up to 27 centimetres long and has an oval, olive-green carapace (upper shell). The name "map turtle" comes from the fine yellow lines across the shell, resembling the lines of a topographic map. These lines continue across the turtle’s head and legs. The plastron (lower shell) is light yellow. Females can be as much as twice as long as males.

Where does the northern map turtle live? 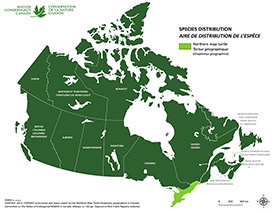 In Canada, map turtles are found in southern Ontario and along the St. Lawrence River into Quebec. The rivers and lakes where they live are soft-bottomed with slow-moving water and must support molluscs — a favourite source of food for females. On the other hand, males and young map turtles mainly eat insects and crayfish. In the winter, northern map turtles hibernate at the bottom of these rivers, while summer habitat contains basking sites such as rocks or fallen trees for communal basking.

What is the northern map turtle's conservation status?

The Committee on the Status of Endangered Wildlife in Canada assessed the northern map turtle as special concern. Threats to this species include habitat loss and degradation due to shoreline development, declining water quality and mortality from collisions with cars or motorboats.

What is NCC doing to protect the northern map turtle's habitat?

In Ontario, the Nature Conservancy of Canada (NCC) is protecting and restoring habitat on properties where the northern map turtle is found. In Quebec, NCC is protecting habitat for map turtles on the St. Lawrence River, and certain lakes and rivers, such as the Lake of Two Mountains. It is also developing and protecting egg-laying sites and installing basking structures in areas where such sites are inadequate or insufficient, and raising awareness among shorefront landowners, citizens and elected officials on the importance of conserving this species.