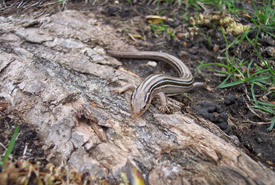 The prairie skink has a brown or tan back, with darker sides, and is easily distinguished by the lines running down its body. It is 13 to 22 centimetres (five to nine inches) in length and has short legs. Adults have blue-grey tails, while juveniles have bright blue ones. During the breeding season, which takes place in spring, males’ heads and throats turn reddish orange. 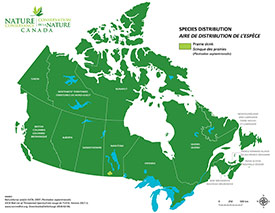 The prairie skink occurs in a narrow band of prairies extending from Texas north to Manitoba. In Canada, it has only been found in Manitoba’s Brandon Sandhills area and Lauder Sandhills.

One of only five lizard species in Canada, the prairie skink can be found in mixed-grass prairie habitat with sandy soil. This loose soil type allows the lizard to easily dig burrows for nesting and overwintering. Females also make their nests under flat rocks, fallen trees and discarded objects, such as sheet metal, old panels, plywood and shingles.

The Committee on the Status of Endangered Wildlife in Canada assessed the prairie skink as special concern. This species is primarily threatened by habitat loss due to human activity and development. The spreading of leafy spurge, an invasive plant species, and aspen succession also threaten this species.

Since 1998, the Nature Conservancy of Canada (NCC) has been protecting a natural area called the Yellow Quill Prairie, located southeast of Brandon, Manitoba. This property has mixed-grass prairie, the prairie skink’s preferred habitat. In 2017, NCC expanded its conservation work in the Assiniboine Delta natural area where the prairie skink lives.