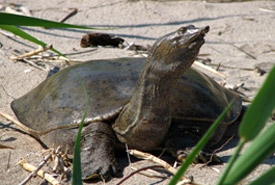 Each spring, using shovels and rakes, volunteers get to work cleaning part of the shores of the Pike River in Quebec — a tributary of the Missisquoi Bay at Champlain Lake. They work to clear nesting sites in the bare sand that are highly coveted by female spiny softshell turtles. Since the turtles venture onto beaches in early June, the group must work swiftly to create attractive and safe nest sites — five-star hotels for turtles.

The medium- to large-sized spiny softshell turtle gets its name from its soft, leathery shell and the small, spiny projections, which feel like sandpaper, that protrude along the shell’s front edge. Its shell is olive to tan in colour, with black spots on top, and creamy white below. It has a long neck and snout, and its webbed feet are well adapted for swimming.

Where does the spiny softshell turtle live?

The spiny softshell turtle’s range extends from the Great Lakes, south to the Gulf of Mexico. In Canada, they are found only in southern Ontario and southwestern Quebec. They no longer occur in several areas, including the Ottawa River and Lake Ontario.

Spiny softshell turtles are found in a variety of aquatic habitats with soft bottoms, including rivers, lakes, marshes and ponds. They are rarely found far from water, being a highly aquatic species. They nest in sandy or gravelly areas that are close to the shore and tend to return to the same nesting and hibernation sites year after year.

What is the spiny softshell turtle's conservation status? 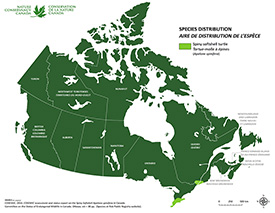 With its flat, soft shell and long thin nose, this species often attracts public curiosity. However, it is actually a shy and nervous creature, and is highly vulnerable.

Spiny softshell turtles are listed as endangered in Canada. Threats to this species include habitat degradation due to development along shorelines and dams, nest predation by raccoons and foxes, and collisions with motorboats. The turtle’s vulnerability is increased even further as females don’t reach sexual maturity until 12 to 15 years of age, and few hatchlings reach adulthood.

What is NCC doing to help protect the spiny softshell turtle's habitat?

The Nature Conservancy of Canada (NCC) is protecting and restoring spiny softshell turtle habitat on properties where they occur in southern Ontario.

NCC is actively involved in several initiatives to protect the spiny softshell turtle, including habitat protection, stewardship and restoration of protected areas in and around Champlain Lake, Quebec. In Lake Champlain, NCC is part of a multi-partner team that has been using radio tracking to understand the habitat needs of spiny softshell turtles since 1998. By documenting the movements and dynamics of the populations of this endangered species, researchers identified the nesting grounds of female turtles only four kilometres from their winter hibernating grounds.

NCC staff are also a member of the Spiny Softshell Recovery Team, and coordinates volunteers from the group SOS Turtles, which is involved in the cleanup of nesting sites, nest monitoring and eggshell collection in the fall (this information is used to survey the number of turtles hatched at each nest site). These activities are funded through a spiny softshell turtle endowment fund. Since 2009, NCC and its partners have also participated in an artificial incubation program in which eggs are collected on-site and hatchlings are released into the wild to increase hatching rates.

Thanks to the collaboration between NCC and Quebec’s Ministère des Forêts, de la Faune et des Parcs, habitat for the spiny softshell is also being restored elsewhere in Quebec. Reynolds Pond, a shallow waterbody connected to Lake Champlain, plays an important role in the spiny softshell turtle’s life cycle. The pond warms up quickly after the snow melts, and adult turtles rush in as soon as spring arrives to feed and warm themselves. Now, Reynolds Pond has become an oasis for spiny softshell turtles as well as a host of other species through the creation of basking sites and its connectivity to Lake Champlain.

NCC also conducts a wide range of educational and outreach activities to spread the word about this shy, long-nosed turtle. This is an excellent opportunity for NCC to educate a broader audience about the importance of habitat protection for the spiny softshell turtle.