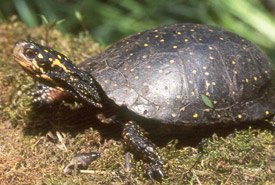 With a small, dark carapace (upper shell) dotted with round yellow-orange spots on the it, neck, head and limbs, spotted turtles lives up to their name. Newly hatched turtles sometimes lack the spots. This species can grow up to 14 centimetres in length.

Males of this species differ from females in appearance, with their brown eyes and tan chins; females have orange eyes and yellow chins.

Where does the spotted turtle live? 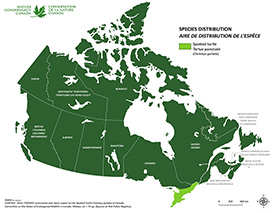 In Canada, spotted turtles are only found in southern Ontario and, historically, were also in southwestern Quebec.

They live in bogs, marshes and soft-bottom lakes with slow-moving, clean water, but may travel short distances overland when it is time for the females to lay eggs.

What is the spotted turtle's conservation status?

The Committee on the Status of Endangered Wildlife in Canada assessed this species as endangered. Wetland habitat loss, illegal collection for the pet trade, nest predation, pollution, and road collisions threaten this species.

What is NCC doing to protect the spotted turtle's habitat?

The Nature Conservancy of Canada is protecting and restoring spotted turtle habitat on properties where they occur in southern Ontario.

If you happen to spot a turtle in Quebec, visit carapace.ca and fill out a turtle sighting form on the website.