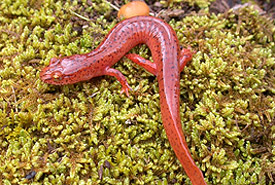 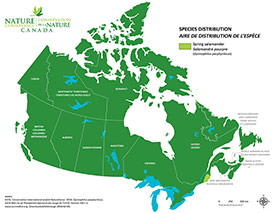 This nocturnal salamander is the largest of the lungless salamanders — amphibians that require a moist habitat to enable their skin to breathe. Growing up to 20 centimetres in length, the spring salamander is named after the habitat where it is most often found: cool, clear, spring-fed streams.

The spring salamander hunts at night. It often feeds on other, smaller, salamander species. It can escape its main predator, the trout, by going up onto land.

The species' survival is threatened when the forests are cleared and stream flows are disrupted.

There are only few known Canadian populations of spring salamander. The Committee on the Status of Endangered Wildlife in Canada assessed this species as threatened.

The Nature Conservancy of Canada (NCC) is working actively with partners in the area to protect its habitat in Quebec's Covey Hill. Located at the northern extension of the Adirondack Mountains in Canada, Covey Hill's extensive peat bogs, pine barrens and natural springs provide key habitat for spring salamanders. A number of other imperiled plant and animal species are also found here.

These species share the area with the provincially rare twin-scaped bladderwort, bird species such as wild turkey and Cooper's hawk and mammals such as bobcat and black bear.