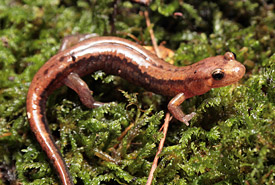 What amphibians have no lungs and depend on the humidity of their environment to survive? Stream salamanders!

Lacking lungs, they breathe by absorbing oxygen directly through their skin and palate, which must remain constantly humid to allow for gas exchange.

Stream salamanders live in streams, wetland depressions and hillside springs. During dry periods, certain species can bury up to 90 centimetres into the soil to find the humidity they need to survive. In the wet season, salamanders sometimes venture a few meters away from streams. Young salamanders, however, only live in water and breathe using gills, which they lose as adults.

These salamanders are restricted to the upper part of streams, where water flows intermittently. Intermittent streams provide them with egg-laying sites, shelter from predators, and places to feed on small invertebrates (larvae, insects and worms). Only rarely can they be found in lower parts of streams, where continuously flowing water favours the presence of certain predators, such as brook trout. Other animals, such as snakes, crayfish and birds, may also feed on salamanders. In fact, the spring salamander, in this environment, can sometimes become a predator to its smaller cousins! As the cold season approaches, stream salamanders bury themselves in the mud or in crevices in the bedrock to hibernate protected from the freezing cold.

Stream salamanders are reclusive creatures, active mostly at night and on rainy days. They are very sensitive to any changes affecting the quality or quantity of water in their habitat. Variations in stream flow or the drainage of wetlands due to water pumping or deforestation can have a very direct and immediate impact on their survival. Water pollution and sedimentation can cause the death of salamander larvae, which need clear, well-oxygenated water. As a result, two of Canada's four stream salamander species are considered endangered.

The Nature Conservancy of Canada (NCC) is working to protect Covey Hill region’s streams, forests and wetlands, and to conserve their ecological integrity for the sake of the salamanders. A natural laboratory has been set up on-site, where several aspects of the environment, such as the region’s unique hydrology, are studied in partnership with several universities, including the Université du Québec à Montréal. NCC coordinates all field work on-site and is cooperating with The Nature Conservancy's (U.S.) Adirondack Chapter to protect the area on both sides of the American border.

The habitats on which stream salamanders depend are unique and delicately balanced. To ensure these species are protected, the conservation plan implemented at Covey Hill and the recommendations it includes must be applied across the province in all similar environments where these valuable amphibians are found.