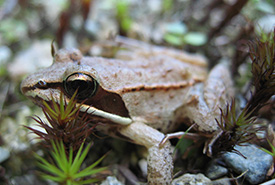 The frog behind the mask

A medium-sized frog that can reach about six to eight centimetres in length, the wood frog ranges in colour from tan, to reddish or dark brown. It has a distinctive dark brown “mask” across its eyes. Its underside is a pale yellow or green. 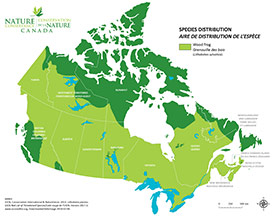 The wood frog can be found in forests and wooded areas in every province and territory in Canada, as well as the eastern United States. Most of its global range is in Canada. It lays its eggs early in the spring in small temporary bodies of water called vernal pools.

Many frog species survive winter by digging a hole at the bottom of a pond to avoid freezing. The wood frog takes a different approach, staying under leaves on land. When the temperature drops below freezing and ice begins to form, they circulate glucose in their blood. This sugary antifreeze mixture keeps ice crystals from forming in its organs, tissues and cells. The frog’s brain stops working, its heart stops and it stops breathing. Frogs can freeze and thaw several times over a winter, but once spring arrives, they use the stored glucose to fuel their spring chorus and mating.

The International Union for Conservation of Nature in 2015 assessed the wood frog globally as least concern. However, locally, this species still faces risk to due to habitat loss.

In 2010, NCC began a wetland restoration project in Ontario’s Norfolk County on the Big Creek and Dedrick watersheds. NCC and local partners have now restored 127 hectares (314 acres) of wetlands. These wetlands provide important breeding habitat in a region where many wetlands have been lost.