The most distinctive feature of an adult round goby is the prominent black spot at the end of its first dorsal fin. Unlike native sculpins, which it is commonly confused with, its body is fully scaled. Reproducing males will morph from their usual brownish/olive scales and brown spots to sport almost completely black fins and body. Another unusual feature of the round goby is the fused scallop-shaped pelvic fin on its belly. 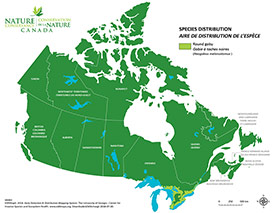 The round goby is an invasive species known to exist in all five Great Lakes. It has spread to rivers and streams that are connected to them.

The Ontario provincial government is combatting the spread of the species, by prohibiting the possession of live round goby and the use of the species as baitfish.

This unwanted species’ main source of food is just as unwelcome in Canadian waters as the fish itself. However zebra and quagga mussels thrive in the hard substrates where round gobies also live.

The round goby wreaks havoc outside of the water, too. Researchers believe the round goby is linked to outbreaks of Type E botulism. This bacteria can infect fish-eating birds, such as gulls, loons and cormorants. It can restrict their mobility, preventing them from flying or holding their head up. This can, unfortunately, cause the infected bird to drown. This toxin can be passed when an infected mussel is consumed by a round goby, and then the infected goby is eaten by a bird.

How does it impact other species and habitats?

The round goby out-competes similar species due to its ability to rapidly reproduce. It has an extended reproductive season, compared to most native species, and can spawn several times each season. As a result, round gobies can have a large number of offspring in a year.

The round goby’s aggressive behaviour and rapid reproduction have critically impacted native fish species. It has similar eating and spawning habits as other bottom-dwelling fish, competing with and preying on species such as sculpin and logperch. Gobies also threaten many at-risk species in the Great Lake Basin in Ontario, including northern madtom, eastern sand darter and several freshwater mussel species.

Round goby is also responsible for reducing populations of sport and commercial fish by competing for similar food sources and consuming the eggs and young of species, such as lake trout and smallmouth bass.