www.natureconservancy.ca > Home > What You Can Do > Volunteers > See us in Action

A decade of Conservation Volunteers successes and beyond 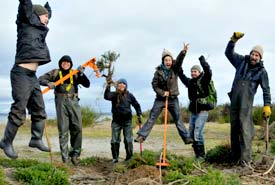 Volunteers clearing broom on James Island, BC (Photo by NCC)

As the signs of spring are appearing across Canada, we are finding ourselves dreaming of heading to the field to join in conservation work. While we continue to put in-person events on hold out of an abundance of caution in light of the COVID-19 pandemic, we have moved to hosting online Nature Talk webinars and virtual events, including our Big Backyard Bioblitz running July 26–August 2.

While we wait to get together in the field with our incredible volunteers, let’s look back at the past decade of Conservation Volunteers at the Nature Conservancy of Canada (NCC). We would like to recognize the amazing work that our volunteers have accomplished in the past decade and beyond, from coast to coast. Below are some impactful stories from across the country! 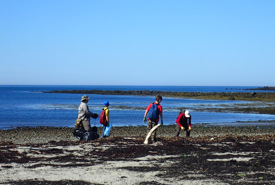 If there is one thing that unites the Maritimes, it’s the Atlantic Ocean and its beautiful coasts. The global issue of garbage in our ocean has been a topic of major concern in the last decade, with high-profile and award-winning documentaries like "A Plastic Ocean" highlighting the enormity of this issue.

Canada has the longest coastline in the world, a significant amount of which is on the East Coast. Over the last decade, Conservation Volunteers in the Atlantic provinces have been tirelessly cleaning up coastal areas to help protect these habitats from the dangers that garbage can cause to wildlife. Every year, several shoreline cleanups have been held, and the impact that volunteers have is enormous, sometimes removing more than 50 garbage bags worth of trash! While much of NCC and our volunteers’ work is land-based, our volunteers are also having a major impact in keeping our coastal environments cleaner and healthier for future generations.

Quebec: Why did the turtle cross the road? 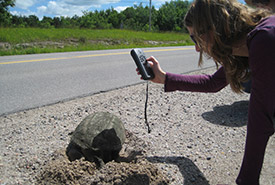 Conservation Volunteers in Quebec are finding out! In Canada, animals dying from collisions with vehicles is a major problem, but generally when we think of this, we picture large mammals, like moose and deer. Unfortunately, many smaller animals, like turtles, fall victim to this as well.

Turtles are slow reproducers and when they do reproduce, many of their hatchlings will not make it to adulthood. In Quebec, NCC has launched a massive turtle monitoring project called the Carapace Project, where citizens are noting their turtle sightings to help build a picture of turtle movements and patterns. This will provide us with an idea of where these populations are concentrated and where they could be at risk from human hazards. Understanding where turtles cross the road or where they are victims of road accidents is very important in informing conservation actions like building turtle crossings under roadways in high-risk areas to provide a safe place for turtles and other small wildlife to cross. This effort to protect turtles wouldn’t be possible without the help of citizen scientists sharing their observations.

Learn more about NCC’s efforts to help turtles on this NatureTalks podcast episode. 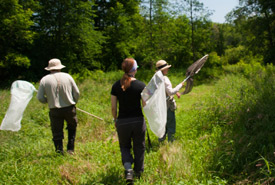 Volunteers searching for dragonflies at Carden Alvar, ON (Photo by Leanne Gauthier-Helmer)

Over the last several decades, Conservation Volunteers have played an essential role in shaping our understanding of butterfly and dragonfly populations in Ontario. Volunteers have been catching and identifying species to record their numbers in the Carden Alvar, a rare ecosystem characterized by shallow soils over limestone. In an average counting event, volunteers will count 2,815 butterflies (with the record being 8,327) or 1,365 dragonflies. The high number of insects recorded combined with the long-term nature of these events provide us with enough data to understand their population and range trends. Butterflies and dragonflies are also indicator species, meaning their numbers can tell us a lot about changes in their ecosystem. This data can also show us if some species are increasing their range northward due to climate change. This knowledge can better prepare conservation planning with an understanding of what our future landscape might need to look like to accommodate these changes.

With new technology, people can even continue to contribute valuable information from anywhere! NCC’s Ontario properties, including Carden Alvar, have been added into iNaturalist, a citizen science app that allows anyone to contribute to science anytime by uploading their sighting of a species.

Hear more about the Carden Alvar in this episode of the NatureTalks podcast.

Manitoba: The two-way street of nature-based education in Manitoba

The impact of the Conservation Volunteers program goes beyond NCC lands; it also impacts those volunteering. This is especially true in Manitoba, thanks to the Manitoba Nature Education Program, where volunteering supplements education and provides youth with the opportunity to get hands-on experience helping the environment. These programs range from in-class presentations about nature to field trips where students volunteer at NCC properties and help us work toward achieving our conservation objectives. The impact and partnerships that this nature stewardship-based education program has led to are paving the road for other exciting projects like our partnership with the Waywayseecappo Off-Campus School. Built on a combination of western science and Indigenous Traditional Knowledge, this program is giving students a chance to get school credits while learning about conservation and volunteering to help achieve conservation objectives. These types of programs can have a massive impact in connecting youth with nature and inspiring future stewards of the environment. 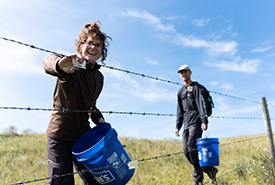 When you picture nature in Saskatchewan, you might think of a rolling sea of grass and vast open skies — the perfect place for birds. Unfortunately, the grasslands are one of the most endangered ecosystems in the world, and its birds are one of the fastest declining species in North America. Over the last decade, Conservation Volunteers have played an essential role in helping our grassland birds. The addition of man-made objects, like fences, to the prairie landscape can unfortunately create new hazards for the birds that live there. In areas where this infrastructure can’t be removed, NCC and volunteers are exploring innovative ways to minimize these hazards for birds. One example of this work is marking fences with vinyl tags so that low-flying birds, like the endangered greater sage-grouse, don’t fly into them. At NCC’s Wideview property, 12 kilometres of fences have been marked, with many more to come.Another example is using up-cycled materials to prevent grassland songbirds from falling into hollow fence posts. More than 5,000 of these fence caps have been installed at Old Man on His Back Prairie and Heritage Conservation Area. The strides made in NCC’s work to protect our prairie birds while setting an example of creative solutions for coexisting with nature wouldn’t be possible without the help of volunteers.Check out this episode of the "Nature of Things" featuring NCC’s grassland properties.

Alberta: Alliances and appetizers in Alberta

Across Canada, a long and hard-fought battle is raging with invasive species. Like any other battle, this fight against invasive species can be aided with creative tactics and allies. In Alberta, NCC has partnered with The Lee Nature Sanctuary Society to remove invasive weeds from The Clifford E. Lee Nature Sanctuary, a property owned and managed by Ducks Unlimited Canada. Conservation Volunteers have been integral to this battle since 2006, but pulling weeds is no easy task and one that is quite deserving of a good snack at the end. This is especially true when the weed being fought is Canada thistle, the seeds of which can lie dormant and undetected and spring into a new plant after 20 years. This battle led to the creative tactic of using the pulled weeds as a tasty fuel for volunteers, ensuring that they get the nutrients they need to keep on fighting another day. Not only are these snacks tasty, but they are also highly nutritious and packed with vitamins, minerals and antioxidants. This tradition ensures that volunteers get a workout and a free superfood boost all the while improving the habitat for native species. Invasive plants might not help native ecosystems, but they can sure help our bodies! 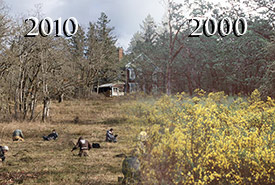 Home to the only native species of oak in Canada found west of the Rockies, the Cowichan Garry Oak Preserve on southern Vancouver Island is characterized by gnarled, old oak trees and wildflower-filled meadows. The sub-Mediterranean climate that creates the conditions for this ecosystem also makes this region very attractive for agricultural and residential development. For this reason, over 95 per cent of Garry oak habitats have been lost. Today, only a few pockets remain, and those are under pressure from invasive species like yellow scotch broom shown in the image above.

Conservation Volunteers have been working tirelessly to help ensure that the Cowichan Garry Oak Preserve is maintained as a shining example of one of these pockets. Volunteers have been working here since 2000, where they have been coming almost every week, rain or shine, to help with different conservation actions. Some of these actions include planting native species and removing invasive plants, such as scotch broom, English ivy, English holly and spurge-laurel. The impact of maintaining a rare ecosystem like this is incredibly important as it provides a home for rare and endangered species, such as the beautiful flower Howell’s triteleia and the iconic western bluebird. It also ensures that we have a living example of what southeastern Vancouver Island might have looked like historically, which can inform land usage and future conservation.

Looking to the future

There is plenty of impact to be made in this next decade, which has been declared the Decade on Ecosystem Restoration by the United Nations. Conservation is becoming ever more important, and the role of volunteers will continue to grow. We look forward to seeing you out in the field again as soon as we can.

We would like to thank Canada Life for helping Canadians connect to nature and lend a hand to protect our country’s species and natural habitats. The company has been a sponsor of NCC’s Conservation Volunteers program since 2012, during which it has helped double the size of the program from 1,500 to 3,000 volunteers per year.