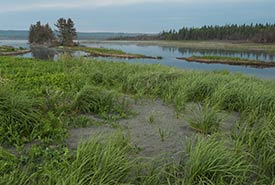 Plan a visit to one of the Nature Conservancy of Canada’s (NCC's) newer conservation areas, the spectacular Grand Manan Migratory Bird Sanctuary Nature Reserve on the Bay of Fundy. Located in a globally significant Important Bird Area, the island of Grand Manan is one of the best destinations for birders in Atlantic Canada. More than 300 species of birds have been recorded here.

This conservation area is located inside a designated Migratory Bird Sanctuary and includes mature coastal forest, a large freshwater pond and a 500-metre coastline with a sand and gravel beach. NCC’s Grand Manan conservation area is accessible to the public and is just a short walk from the Anchorage Provincial Park in Grand Harbour.