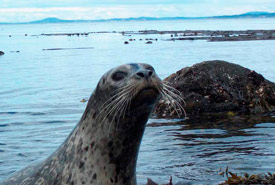 The Musquash Estuary Nature Reserve is a natural treasure and one of NCC’s most significant projects in Atlantic Canada.   Estuaries form where rivers meet the sea. The mixing of fresh and salt water, the continuous action of the tides, and the recycling nutrients, make estuaries among the most fertile and productive ecosystems in the world.  As the only large, ecologically-intact estuary remaining in the Bay of Fundy--home of the world’s highest tides--the Musquash Estuary is unique and irreplaceable.

The Musquash Estuary’s vast coastal marshes are located on one of the North America’s key migration routes, and provide important habitat for many species of birds.  The forests and undeveloped coastline surrounding the estuary protect valuable marine habitats, nurseries for both wild and commercial species.  The Musquash Estuary’s conservation importance was formally recognized in 2007 when the Government of Canada, through the Department of Fisheries and Oceans, designated the Musquash Estuary a Marine Protected Area, New Brunswick’s first and only such designation.