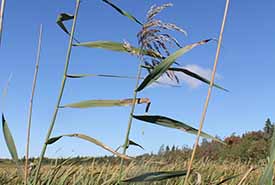 For the Nature Conservancy of Canada, (NCC), acquiring land is just the beginning when it comes to protecting Canada’s natural habitats. Caring for the land is just as important; this includes protecting against invasive species.

Invasive species are the second biggest threat to native biodiversity.

Invasive species are non-native species that spread aggressively and can alter Atlantic Canada's natural habitats. They can be plants, insects, animals or even diseases introduced into a new area where they cause harm. With no natural predators to control them, they can outcompete native plants and animals and alter how ecosystems function.

Why are invasive species harmful?

How do invasive species spread?

Be a part of the solution!

You can help protect our natural areas from these nasty invaders. Once invasive species spread, their management and removal are exponentially more expensive and less efficient. The first step each of us can take is to prevent their introduction or spread. It is much less costly when we invest in prevention and early detection efforts. Here are some ways you can help:

You can support NCC’s work with partners across the Maritimes to map the extent of invasive plants and remove them to restore habitat on protected land. Together, we can make a difference in conserving biodiversity. Your gift to NCC can help unlock critical matching funds to complete on-the-ground activities to care for the health of the land.