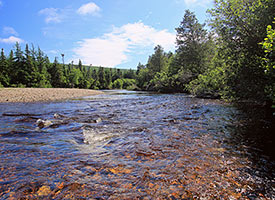 The nature reserve is located in an area that provides habitat for many species of wildlife, including red fox, American beaver, black bear and dozens of species of birds, such as black-and-white warbler, boreal chickadee and Swainson’s thrush. The American marten (Newfoundland population), a threatened species protected under Canada’s Species at Risk Act, is also found in the area.

The riverside property was entrusted to the Nature Conservancy of Canada (NCC) by brothers Fred and Ralph Carter, in memory of their father, Fred Carter Sr., an avid salmon fisherman. As with the majority of our nature reserves, NCC allows public access for recreational and traditional uses.