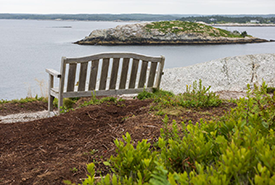 Located just 23 kilometres southwest of Halifax and 10 kilometres east of iconic Peggy’s Cove, in the community of Prospect, lies the Dr. Bill Freedman Nature Reserve. The nature reserve is a popular coastal location for hikers, photographers and birders. The Nature Conservancy of Canada (NCC) has been working here since 2001, protecting 133 hectares for the area's important coastal barrens and forest.

The coastal barrens landscape here juts out into the Atlantic Ocean and is flanked by picturesque Shad Bay and Prospect Bay. The property provides habitat for native species and migratory birds, such as Arctic terns and whimbrels. The coastline is used by a variety of sea ducks, including eye-catching harlequin ducks, black scoters and long-tailed ducks.

The popular out-and-back High Head Trail can be accessed (north to south direction) via Hages Lane in Prospect Village or from Indian Point Road (south to north direction) at the tip of Prospect Head. The 7.6-kilometre-long trail (3.8 kilometres each way) passes through four sections of the Dr. Bill Freedman Nature Reserve and is rated as moderately challenging. On your journey it is important to leave no trace behind and to stay on the well-travelled path that outlines the coast. It is advised to not venture inland toward sensitive ecological habitat nor too close to the rocky cliffs, which can reach up to 26-metres above the water’s surface.

At the start of the trail at from Hages Lane, you are quickly presented with breathtaking views of the open ocean that can be enjoyed from the lone park bench adorned with a bronze plaque dedicated to the nature reserve’s namesake, Dr. Bill Freedman (1950–2015).

A tribute to Dr. Bill Freedman

This NCC site is dedicated to Dr. Bill Freedman, a long-time contributor to the organization. Dr. Freedman served as NCC’s National Board Chair (2008–2009) and a term as the Atlantic Board Chair. He was an ecologist and former Chair of the Department of Biology at Dalhousie University, where he also served as professor emeritus.

In 2013, Dr. Freedman authored the book A History of the Nature Conservancy of Canada to commemorate our 50th anniversary (1962–2012).

Dr. Bill Freedman passed away on Saturday, September 26, 2015, at his home in Halifax after a courageous battle with cancer. He was 65 years of age.

The Nature Conservancy of Canada has established the Science in Conservation Internship in Dr. Bill Freedman’s name. The internship is awarded to one Dalhousie University student each year and provides real world conservation experience through working directly with senior NCC staff.

To contribute towards this nature reserve, please contact the Nature Conservancy of Canada at 1-877-231-4400.

The coastal trail leads you in and out of forested pathways and onto rocky outcrops where various look-off points provide fresh ocean breezes and panoramic views of the Atlantic Ocean. Nova Scotia’s jagged southern coastline and several rocky islands can be seen in the distance, including the nearby Inner Gull Island and Outer Gull Island, which are popular resting areas for a variety of ocean-faring birds. Fishing boats can be observed in the distance while ocean waves crash on the rocks far below and gulls soar high-up above.

The area serves as nesting, feeding and overwintering grounds for many species of birds, including whimbrel, willet, great blue heron, osprey, and harlequin duck. There are several idyllic coves (The Alley, Phantom Cove and Mullins Cove) and key vantage points, such as Tanner’s West Point, to sit and observe the majestic surroundings. Low crowberry bushes are abundant along the trail, and the area is awash in hues of red during the fall. With its fresh sea breezes and panoramic vistas, the High Head Trail is wonderful hike in the summertime and an ideal place for birdwatching.

Granite barrens play a vital role in the environment by purifying massive amounts of ground water prior to its re-entry in the ocean. Most of Prospect High Head drains directly into coastal waters. These coastal waters are important for the marine communities; slope or runoff waters affect plankton production in feeding areas for whales, dolphins and seals.

Species of interest found here include: