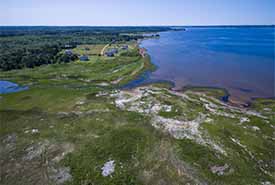 NCC’s Blooming Point nature reserve is located on Tracadie Bay in an internationally recognized Important Bird Area. It provides valuable coastal and wetland habitat for many species of birds, including Canada warbler, listed as threatened under Canada’s Species at Risk Act. The nature reserve also provides habitat for plants uncommon on PEI, such as royal fern, spinulose wood fern and marsh cinquefoil. Conservation of the forest and dunes will help provide a natural stabilizing buffer for the beach at Blooming Point.

The nature reserve was entrusted to NCC by the MacGillvray family of Blooming Point, through the Government of Canada’s Ecological Gifts Program. NCC’s reserve borders the national park and was one of the last areas at Blooming Point that hadn’t already been conserved.