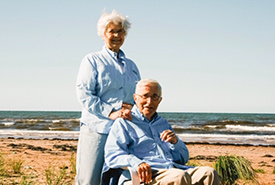 In 2019, the Nature Conservancy of Canada (NCC) protected a 91-hectare (226-acre) rare wetland and hardwood forest in Kingsboro, near Souris. The ecologically significant site was donated for conservation by Camilla MacPhee and family, in memory of her husband, Souris business leader, Melvin MacPhee.

The Mel and Camilla MacPhee Nature Reserve features a large undisturbed peat bog, a type of freshwater wetland that is rare on the Island. Peat bogs are significant ecosystems because they perform multiple functions: they provide habitat for plants and wildlife, purify drinking water, minimize flood risks and help address climate change by storing carbon. The peat bog is surrounded by an older forest of red maple, sugar maple and yellow birch, uncommon native hardwoods. The nature reserve provides habitat for eastern wood-pewee and Canada warbler, both designated under Canada’s Species at Risk Act, as well as many provincially rare plants, such as herb-Robert and nodding trillium.

In addition to its rare features, the new nature reserve is valuable for conservation because it is located about halfway between East Baltic Bog and Basin Head Marine Protected Area and creates a larger network of protected areas in eastern PEI.

NCC would also like to thank other project contributors, including the Province of PEI, the PEI Wildlife Conservation Fund and the estate of Heather McLaren.