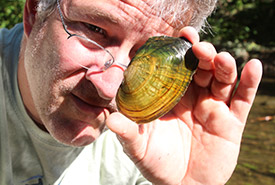 Dr. Philippe Blais shares his experience as a donor and volunteer. An NCC partner since 2009 and a Leader in Conservation, Dr. Blais is also an active volunteer. Among other activities, he has participated in cleanup of a riverside property on the Richelieu River, in an insect inventory, as well as in improving a northern map turtle egg-laying site.

NCC: How did you first find out about NCC?

PB: I had the opportunity to get to know a former member of the Board of Directors for NCC Quebec, Dr. Rodger Titman, during a class on desert ecology at McGill, a few years ago. […]
But it was in 2009, when I started visiting the Ottawa Valley during my summer holidays that I truly began to collaborate properly with the regional NCC team. From then on, my fate was sealed!

NCC: You are a Leader in Conservation, which means that you make a yearly contribution to NCC of at least $1,000. Why is it important for you to support NCC’s activities?

PB: I find NCC’s fundamental approach to conservation both simple and elegant, backed by undeniable logic and admirable effectiveness: securement can prevent destruction. It’s a most convincing philosophy. If the forests, wetlands and prairies belong to us, then no one can destroy them. On top of which, NCC is, without fail, rated as one of the leading charitable organizations in terms of efficiency.

NCC: How would you describe the Nature Conservancy of Canada to your acquaintances?

PB: A conservation organization that has already proven its worth, but that still maintains its grand founding ambition, because the work is far from over. The entire team’s dedication to their objective is particularly impressive and consistent. All the people that I have had the opportunity to work with are obviously driven by the mission. It’s a privilege to be able to add my contribution to their efforts.

NCC: As a biologist, why do you think it is important to protect nature?

PB: My answer to that question is heavily biased due to my profession — medicine. I often compare natural environments to our vital organs. Thus, forests are our planet’s lungs, wetlands its kidneys, waterways its arteries. Natural areas are therefore essential to the physiological equilibrium of the environment — the environment in which we live, without which we cannot live. Many people have forgotten, or perhaps have never even realized, that they are an integral part of their environment. Abusing our planet’s living resources is thus an act of self-mutilation, a madness that makes no sense. […] It seems to me that attempting to protect what remains is an absolute imperative.

PB: My deepest wish is that my children also have the opportunity someday to enjoy the awe-inspiring beauty of the natural environments that I have had the chance to visit in my life. Or at least, that they know that those majestic places are still there, forever, should their descendants feel like venturing into them. A gift from their dreamer of a grandfather and his many determined friends…