Marie-José Auclair, president of the board of Appalachian Corridor, and Bob Winsor (Photo by Martin Beaulieu) 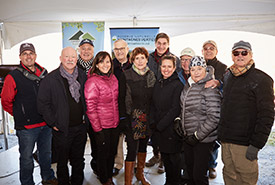 Sometimes, it’s a special love for a region that motivates our donors. Our recent recognition event in the heart of the Green Mountains, in the Eastern Townships, is a shining example of that.

For 25 years, enthusiasts of the Eastern Townships, in conjunction with the federal and provincial governments who contribute to each individual donation, have been helping to protect 133 km2 of land in the Green Mountains. It was only fitting that the Nature Conservancy of Canada (NCC) and the Appalachian Corridor took the opportunity to thank them for their support on a beautiful fall Sunday in Sutton.

The event’s enchanting setting was a perfect reminder for the audience of the magnitude of their generous contribution. It was the last day to admire the colours, and despite the rather cool weather, about 100 people, including donors, MPs and MNAs, mayors and volunteers, attended the event.

Joël Bonin, associate vice-president at NCC, had been kind enough to provide blankets for those who were feeling chilly, and hot drinks were on hand. All of these wonderful people were gathered to celebrate the progress made, and to remind themselves that efforts to protect even more land and develop new trails and vantage points, while respecting nature, must continue. 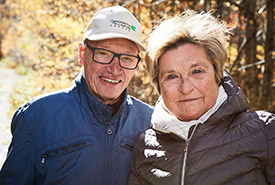 Several donors made speeches, including Michel Saucier, who, with his wife, Gisèle Beaulieu-Saucier, has actively participated in the protection of a property in the area that extends over the Dos d’Orignal and on the northwest slope of Mount Gagnon. “Thanks to the efforts of NCC and its donors, our beautiful mountain will continue to delight us. What an extraordinary landscape as the backdrop for our ski slopes and hiking trails!” he said.

When we met them a little later at the edge of the woods, Michel and Gisèle told us how satisfied they felt to be involved in such projects and to give to causes that are so dear to their hearts. Amateur skiers and outdoor enthusiasts, they still remember when — 10 years ago — a very good friend introduced them to NCC and its mission. Sometime later, they became fully involved by giving a major boost to NCC’s fundraising. 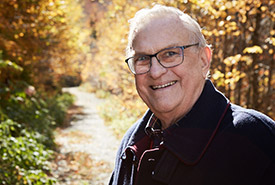 Bob Winsor also spoke. As co-chair of the Sutton campaign in 2007, he helped raise $1.3 million from 400 donors. “I have always been an outdoor enthusiast, so I was an easy convert to the Nature Conservancy of Canada’s mission,” he said.

Bob was also involved in the design and production of three signs located at the entrance to the Mount Sutton trail network, which were unveiled for the occasion. All donors’ names appear on one of the panels as a sign of recognition. Bob was particularly proud of his contribution and happily cut the ribbon.

After wine and some light food, participants were invited to enjoy several workshops, including the screening of a video featuring the protected species of the area and one from the Union québécoise de réhabilitation des oiseaux de proie, which was a great success. 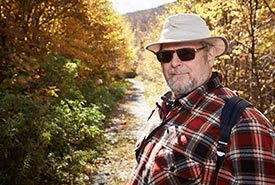 This was the first time that Emil Grimmel participated in such an event despite being a long-time NCC donor. It was through documentaries on nature and animals that he first became familiar with the notion of conservation. An avid outdoor enthusiast, he began giving to American organizations and then to NCC, to which he has been a loyal donor for more than 20 years. “I’m trying to do my part,” he said modestly. Due to lack of time, Emil has been less in touch with nature than previously. As a result, he was particularly pleased to participate in this recognition event, which concluded with an interpretive hike on the magnificent trails of Mount Sutton.

The words “Add your name” are written on one of the three panels as an invitation and reminder that protecting the natural environment is a long-term mission and that the work must always go on.