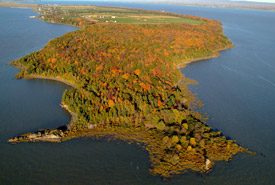 Several threatened species are present on the banks of the point. Victorin’s gentian, Victorin's water-hemlock and Parker’s pipewort are provincially threatened species. The Victorin’s gentian and Victorin's water-hemlock are also designated as, respectively, threatened and of special concern, by the Government of Canada. This floral mix, as well as 10 other species, is endemic to the freshwater and brackish estuaries of the Saint Lawrence River, meaning that they are found nowhere else in the world.

This ecosystem is also the habitat for a particularly unique bird population. The point’s extensive sandbars have been designated as a waterfowl gathering area (aire de concentration d’oiseaux aquatiques) by the Government of Quebec. The proximity of the Cap Tourmente National Reserve and the migratory bird refuge on the Côte-du-Sud make the Jean-Paul-Riopelle Nature Reserve an important migratory stop for aquatic birds, such as the northern shoveler. Due to its location on the Eastern Flyway, the inland forest ecosystem provides habitats for a number of bird species. Breeding birds found at the Pointe aux Pins include great-horned owl, northern saw-whet owl and long-eared owl.

Come enjoy this jewel of our natural heritage!

The conservation and enhancement of the Jean-Paul-Riopelle Nature Reserve will allow the protection of the area while ensuring access for the public. In conserving this rich ecosystem, NCC aims to showcase the area’s natural beauty and landscapes while the intersection where nature meets culture.

Welcome to the Jean-Paul-Riopelle Nature Reserve

Jean-Paul Riopelle, a painter and sculptor born in Montreal in 1923, lived on Île-aux-Oies and Isle-aux-Grues from the mid-1970s until his death in 2002. This internationally acclaimed artist drew inspiration from Pointe aux Pins for many of his pieces; to honour his cultural contributions to the area, the nature reserve was named after him. The presence of such a remarkable artist left a definitive imprint on the cultural history of this region.

More than 2.5 kilometres of trails run through the forest. Throughout your hike, you will have the opportunity to discover remarkable flora and fauna. We suggest that you follow a loop consisting of the following three major trails: 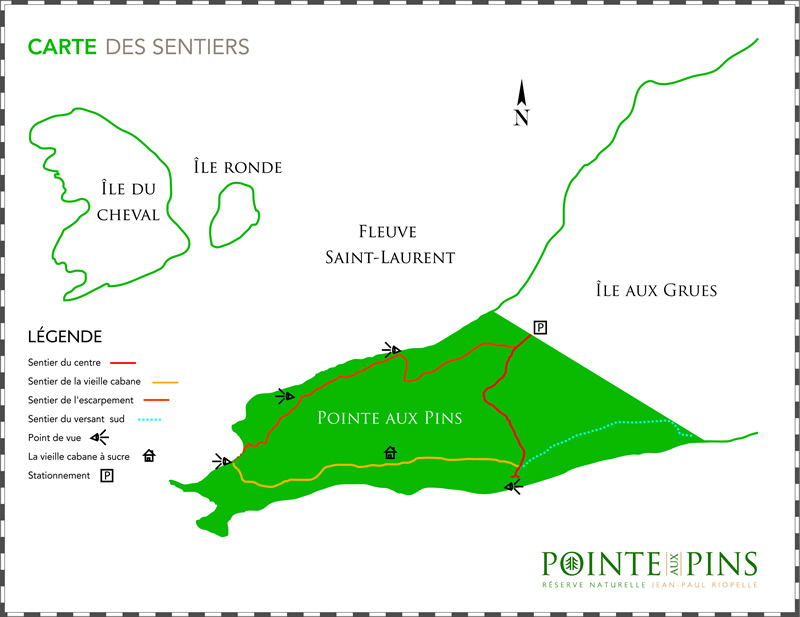 Two shelters, as well as other lookout points, provide opportunities to take a break while appreciating the landscape.

You can refer to interpretation panels set up all along the three trails to learn more about the area’s rich ecology. The hike will also introduce you to the island’s artistic, cultural and historic heritage. See for yourself how nature and culture come together to form the beauty of this exceptional place. In order to protect this natural environment, bikes are not allowed on the territory of the reserve. Bike racks were installed at the entrance to the site.

During your visit, please stay on the trails. We rely on your cooperation to:

NCC thanks all of the private and public financial partners who have contributed to the responsible development of the Jean-Paul-Riopelle Nature Reserve, in particular to the Fondation Hyro-Québec pour l’environnement, which provides ongoing funding for the project. We are also grateful to the Government of Canada, the Fondation de la faune du Québec, the ministère du Développement durable, de l’Environnement et des Parcs, the Interactions communautaires program, as well as private donors Emaral Investments and the Fondation McCarthy Tétrault for their valuable participation in this initiative. We also wish to recognize the support received locally from the municipality of Saint-Antoine-de-l’Isle-aux-Grues, the Fondation Riopelle-Vachon and the Conférence régionale des élu(e)s for Chaudière-Appalaches, as well as the contribution of local artists who graciously offered their work to be included in the interpretation panels.

Directions to the Jean-Paul-Riopelle Nature Reserve

Isle-aux-Grues is located across from Montmagny, a town on the south shore of the Saint Lawrence river, about 300 kilometres east of Montreal and 80 kilometres from Quebec city. The island can be reached by ferry during the summer season and by plane year-round, via Air Montmagny.