A threatened species’ haven, discovered in 1994, is now protected 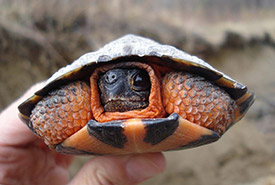 To fully appreciate the exciting news that a wood turtle nesting site is now protected, let us first introduce you to this species. When a wood turtle wants a snack, it stomps on the ground to imitate the sound of falling rain so that earthworms come out! Along with this fun fact, you should also know that one of Canada’s largest wood turtle populations lives in Quebec’s Mauricie region. The Nature Conservancy of Canada (NCC) has added this nesting site and a nearby property to its conservation areas in the region. These natural areas provide wetland and forest habitats, which are essential to the wood turtles’ survival, and part of an ecological corridor connecting them to La Mauricie National Park.

The discovery of an exceptional site

NCC caught up with Denis Masse, a retired biologist from La Mauricie National Park, who is extremely knowledgeable about this nesting site. In 1994, local resident Shirley Smith reported seeing several turtles near her property and invited Denis to come study them. Until his recent retirement, he was closely involved in protecting the species and its habitat. If anyone knows about the history of this exceptional place, it’s Denis.

“In 1995, we returned with other biologists and found several females laying eggs. We tagged the wood turtles to follow their movements — it was the first time we installed transmitters on turtles,” explains Denis. “We studied their movements and realized they were travelling close to three kilometres in all directions to lay their eggs.”

Between 15 and 20 wood turtle nests were found that year, an exceptional number for a rare species. These surveys led to a major study in 1996 with several partners, including the Ministère des Forêts, de la Faune et des Parcs and universities, to learn more about the species and its environment. The researchers determined that 40 per cent of the population, an estimated 100 to 150 turtles, frequented the nesting site. It was a large number for such a vulnerable population.

“Since the conservation and recovery of this vulnerable species depends on the survival of female adults and the protection of nesting sites, we had to act fast,” says Denis.

The wood turtle was designated a threatened species in 2007.

“They changed the turtle’s status because populations were dwindling and even disappearing from rivers where it used to have an established presence,” he says.

Like elsewhere, the turtle population in Mauricie was affected by large numbers of visitors, poachers, collisions with vehicles and log driving. Fortunately, the study results led to the development of rapid measures to protect the species. 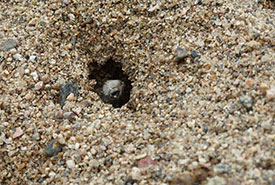 Substantial information about wood turtle behaviour has been gathered over the years, thanks to research conducted on the site. For example, unlike most turtles, which come out of the water, lay their eggs and then leave, wood turtles can stay up to eight days at the nesting site. They dig several nests, but only lay their eggs in one. Are they looking for the ideal spot or is this a way to fool predators? We’re not exactly sure.

“We don’t really know how long wood turtles live, but turtles that I handled in 1995, that were about 20 years old at the time, are still alive today! They return every year to the nesting site,” says Denis.

Protecting the site is the most effective way to repopulate La Mauricie National Park with wood turtles. When they are between six and eight years old, they disperse to colonize new areas. Some turtles born on the now-protected site have been identified in distant water bodies. It’s a long process, but in a few decades, we’re optimistic that this site will help to repopulate a much wider area.

Thank you to our collaborators

NCC is now protecting this extremely valuable ecological site, contributing to the survival and recovery of wood turtles in the region. This project is the work of many; residents, volunteers, biologists, organizations, businesses and governments have come together to help nature thrive. We would like to thank Denis for his time and unwavering commitment, along with all those involved in this wonderful project.

To learn more about what to do when you encounter a turtle on the road, visit carapace.ca.