This species, designated as threatened in Quebec and Canada, is weakened because of nautical activities, modified shorelines and water pollution.

In Quebec’s Lake Champlain, the Nature Conservancy of Canada (NCC) is part of a multi-partner team that has been using radio telemetry to understand the habitat needs of spiny softshell turtles since 1998. By documenting the movements and dynamics of the population of this threatened species, the researchers identified the nesting grounds of female turtles only four kilometres away from the species’ winter hibernating grounds.

Following the discovery, NCC worked with partners and donors to conserve the site.

Now, a team of Conservation Volunteers visits the nesting area each spring to clear it of any litter and prepare it for the arrival of the female turtles in early June. NCC and partners have continued tracking the turtles on an intermittent basis, monitoring the impact of human activities on their well-being. They also started the Mikinak Festival in Pike River. Every summer, the festival invites nature lovers to learn more about this local iconic species and to better understand the region's biodiversity.

Predation, changing shorelines and certain recreational activities (such as motorized boating) all threaten this species' survival. And since spiny softshell turtles tend to return to the same nesting and hibernation sites year after year, it is even more crucial for researchers to study their habitat needs and conserve these places. 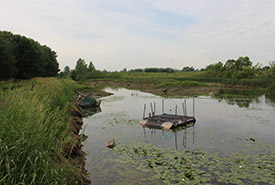 Thanks to the exceptional collaboration between NCC and the Ministère des Forêts, de la Faune et de Parcs (MFFP), a protected agricultural land in Saint-Georges-de-Clarenceville has benefited from the expertise of several teams of professionals and increased in ecological value

Reynolds Pond, a shallow pond connected to Lake Champlain by East Swamp Creek, plays an important role in the spiny softshell turtle life cycle. The pond warms up quickly after the snow melts. Adult turtles rush in as soon as spring arrives to feed and warm themselves. However, the pond needed to be redesigned so that turtles (but also fishes) can take maximum advantage of its benefits for a longer period of time.

Successive basins of pits and canals have been created. Mounds, logs and flat stones have also been set up so that the turtles can bask in the sun. Reynolds Pond has now become an oasis for the spiny softshell turtle as well as for a host of other species.

Thanks to our financial partners for this restoration project

Thanks also to the following partners

and the Reynolds family.

Everyone can play a role in protecting turtles. By greening the shores of Lake Champlain and the banks of streams that flow into it, we can improve both the turtle habitat and water quality. Not only will it provide a healthier environment for the spiny softshell turtle, but also for local communities.

Have you seen a turtle? By letting a local conservation organization know, you can contribute to its protection. Visit carapace.ca.