Tourbière-de-Venise-Ouest Nature Reserve: A site to explore and protect 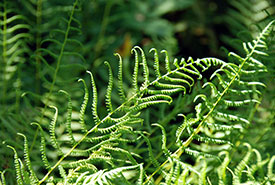 The Tourbière de Venise-Ouest (peatland) straddles the municipalities of Venise-en-Québec and Saint-Georges-de-Clarenceville. The area, protected by the Nature Conservancy of Canada (NCC), covers 380 hectares (939 acres) and includes 80 per cent of the peatland.

The peatland is home to several rare species and serves a number of important ecological roles that benefit the neighbouring population. For example, it helps maintain Mississquoi Bay’s water quality by filtering it as it passes through. The peatland also lessens the impact of Lake Champlain’s seasonal flooding by acting as a sponge that initially absorbs the overflow and then gradually releases it.

As several plants and animals can only be found in peatlands due to the unique conditions these habitats provide, the presence of a peatland means greater biodiversity for an entire region. Around 100 bird species and several species of mammals, amphibians and reptiles, such as the painted turtle and the least bittern, live there.

The Venise-Ouest peatland is home to approximately 15 species at risk. One is the very rare bog fern, which can only be found in two other places in Quebec. Conserving the peatland is vital for this species’ survival in the province.

A unique and fragile environment

The Venise-Ouest peatland and the plants and animals found here are sensitive to disturbances, such as boating in the Étang John (pond), harvesting of timber or plants, ATV traffic and off-road traffic.

In the late 90s, invasive European buckthorn colonized the peatland. A multi-year invasive plant control project was established. The area has since become a place where control methods and techniques are tested and perfected.

The municipality of Venise-en-Québec created a 2.9-kilometre interpretive trail and facilities so that visitors can explore the area’s natural riches.

For more information, read the pamphlet.

NCC wishes to thank the following donors who made it possible to protect this magnificent peatland:

NCC also wishes to thank the landowners involved in this conservation effort: John Sauro, the Neville family and France Larochelle.

Poem by Gaël Koné, who participated in a volunteer activity at the Venise-Ouest peatland.