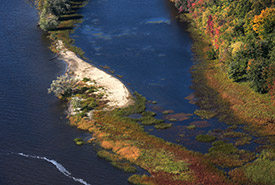 Kettle Island is the third-largest island in the Ottawa River, after Île aux Allumettes and Grand-Calumet. Its name is said to come from its proximity to the Chaudière Falls, which originally resembled a large kettle.

Almost entirely covered by moist forest, the island is home to a silver maple grove as well as stands of basswood and hackberry, a species likely to be designated threatened or vulnerable in Quebec. There are also several swamp areas, which are preferred habitat for several wildlife and plant species frequently found on the islands of the Ottawa River. These include:

The Nature Conservancy of Canada (NCC) acquired 98 per cent of the island’s surface area in 2007, following a donation of land through the Canadian Ecological Gifts Program, which recognized the property as ecologically sensitive. The property contains habitat that could make a significant contribution to the conservation of Canada’s biodiversity and natural heritage. The securement of this property will ensure the island’s natural characteristics for the long term, ensuring that no infrastructure, public or private, will be built or developed on the island.

To conserve these habitats and the species they sustain, access to Kettle Island Nature Reserve is limited to scientific or habitat management purposes and is subject to several restrictions. As a result, it is prohibited to camp, make campfires, harvest plants, flowers, mushrooms, fruits or dead wood, cut trees, bring leashed or unleashed domestic animals, leave waste or build infrastructure. The use of fertilizers, pesticides and herbicides is also prohibited.

Would you like to be involved in the monitoring and management of this property? We are always looking for volunteers to support us in our mission to protect natural environments. For more information, visit the Conservation Volunteers website or email quebec@conservationvolunteers.ca.