The Nature Conservancy of Canada (NCC) is today announcing its first-ever conservation site in the extreme south of Quebec, near Godmanchester. The former owners, the Ryan family, owned the 88-hectare parcel of forests and wetlands for 200 years before donating it to NCC. Now, the land’s rich history and biodiversity will be conserved.

This property boasts 555 NHL-sized rinks worth of deciduous forests and wetlands. NCC’s next step is to do a baseline inventory of the species on the property and to develop a property management plan, which will identify conservation priorities and explore how people can be welcomed to this property for passive recreational uses.

A wide variety of wildflowers bring the landscape to life on this property and, come springtime, burst with colour and offer vital early-season food sources to pollinators. Renowned Quebec artist John Ryan has time and again drawn inspiration from the views and life found on his family’s property. But beyond artistic output, Ryan has also often used the property to help connect others to nature.

Through his involvement with young schoolchildren and seniors suffering from Alzheimer's, Ryan has helped hundreds of people benefit from nature in different ways. Sensitive to the links between First Nations and nature, he created a mural in their honour, in collaboration with an artist from the Mohawk Territory of Akwesasne as part of the Sharing Through the Generations project, which has been exhibited in several locations in North America. His wish for the future is that the entire community can continue enjoying the beauty of nature. 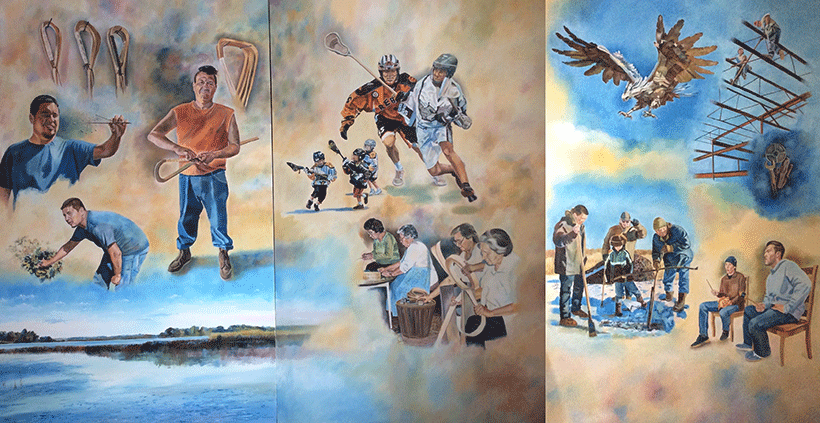 John Ryan's mural for the project Sharing Through the Generations

This property is adjacent to two other protected areas near Godmanchester, serving together as a vital habitat complex for local species, such as wood thrush (threatened) and eastern wood-pewee.

“With my brother and sister, we were looking for a way to keep this natural area intact. It is important to us that it remains unchanged. We don't want such a beautiful place to be razed for development. With the property under NCC protection, we no longer have any concerns about its future. It's protected...forever. With the failing health of our brother, Michael, we were even more appreciative of the NCC team’s efforts to manage the transfer as quickly as possible.” – John Ryan, previous landowner

"The Ryan family's generosity is just the beginning of NCC's work in the extreme south of Quebec. We're excited to be neighbours with the communities surrounding Huntingdon and hope to work together to protect the many natural jewels in the area." – Chantal Cloutier, project manager, Nature Conservancy of Canada

NCC would like to thank the different parties involved in this acquisition: the Government of Quebec, through the Projet de partenariat pour les milieux naturels, the U.S. Fish and Wildlife Service (through its North American Wetlands Conservation Act), and the Ryan and McDonagh families.

In loving tribute to Michael Ryan (1947–2021), brother of John and Joanne, whose wish to see this land protected has now been realized.

The Nature Conservancy of Canada (NCC) is Canada’s leading not-for-profit private land conservation organization, working to protect our most important natural areas and the species they sustain. Since 1962, NCC has helped to protect 14 million hectares across the country, including 48,000 hectares in Quebec. To learn more, visit natureconservancy.ca.

The Projet de partenariat pour les milieux naturels (PPMN) is a four-year grant of more than $53 million from the Ministère de l'Environnement et de la Lutte contre les changements climatiques to NCC. It provides support for voluntary conservation initiatives to ensure the protection of natural areas of interest by establishing financial partnerships with conservation organizations in the province. The PPMN thus aims to develop and consolidate Quebec's network of protected areas located on private land. It follows the Ensemble pour la nature project, which ended on March 31, 2020, and had similar goals.

The North American Wetlands Conservation Act (NAWCA) is a program administered by the U.S. Fish and Wildlife Service.