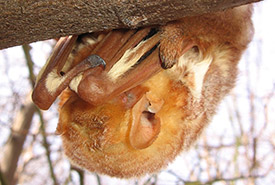 Are you intrigued? Check out the three videos on this page along with lots of additional information and join us to learn more about the wonders surrounding this mysterious little mammal.

Who says bats have diseases?

When it comes to bats and diseases, everyone has an opinion! The most important thing with bats, as with other wild animals, is not to disturb them. If you don't touch them and don't go near them, there is no risk of catching anything!

Of course, if the bat is in your house, that's different! You can then refer to batwatch.ca to let it out while ensuring both you and it stay safe. Under no circumstances should you touch a bat directly! Even though very few bats carry rabies, it’s a serious disease and you should not take any risk.

As for the white-nose syndrome discussed in the video, it isn't dangerous to humans. It is, however, the biggest threat to bats in North America and needs to be addressed to save them. After all, bats are essential to... Oh no, I don’t want to spoil anything, you'll have to come back in two days to listen to the next clip! But to learn more about white-nose syndrome, check out this link! 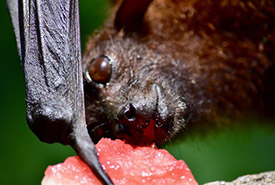 We often hear that bats are blind and move around using sounds that we can't hear. In fact, they aren’t blind and can see quite well. Rather, their nocturnal lifestyle has led them to develop this sense to an unprecedented level of sophistication! Some tropical species are active even in daylight and their large eyes allow them to spot the fruits they feed on!

As for the sounds they produce to navigate, once again, it depends a lot on the type of bat! Here in Canada, all our bats do in fact make those high-pitched sounds that we humans can't hear, with one exception: the spotted bat. It is the only species whose calls we can hear. Mind you, some children can hear the calls of other species because their ears are more sensitive to high-pitched sounds than those of adults.

To identify other species by their calls, we need a device that can capture ultrasound. It's then possible to tweak the recordings a little to make them audible to the human ear.

This doesn't mean that it is impossible to hear bats at all. In fact, they also produce sounds to communicate with each other that resemble clicking noises and are audible to humans, although they aren't very loud.

Who says that bats are vampires?

Another legend! In fact, in 1613, explorers reported having seen blood-drinking bats during their travels in Brazil. A few decades later, stories began appearing featuring vampires with the surprising power to transform themselves into bats! Who would have thought that Dracula was inspired by a little critter no bigger than an ice cube? 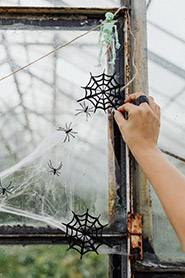 Click here to check out the cute mugs of our eight Quebec species!

Our Canadian bats feed primarily on large flying insects, such as moths. They eat half their weight in insects each night, but a nursing female can eat up to the equivalent of her weight in insects! Spiders and frogs are often mentioned as insect predators, but bats are also part of the mix.

One more thing: the services that bats provide us

In addition to their help controlling insect populations, elsewhere in the world, bats provide greatly valuable services... which are even useful to us in Canada! You don’t believe me?

For one thing, tequila-drinkers have bats to thank. By drinking the nectar of agave flowers, bats allow the plant to thrive... and tequila is made from agave! There are a few hundred flowers around the world that depend on bats as pollinators. And that includes cacao flowers — the tree that gives us the beans we use to make chocolate! And what would life be without delicious chocolate?

Would you like to test your newfound knowledge? Have fun with this bat-related quiz!

Who says that bats live in haunted houses?

Of course, we can’t talk about bats without talking about their habitat! But where do they live? And most importantly, what do they do after Halloween is over?

If you want to welcome bats on your property, you can have fun with your family this winter by building a bat house. Grab your hammer and paintbrush and use this handy guide as a starting point for your creations!

One more thing: a curious detail on some of the images in the videos 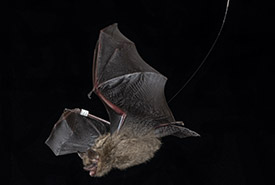 In some of the images, which were generously donated by bat researcher Brock Fenton, you may have noticed a band on the bat’s wing. Some even have antennae on their backs! These rings and antennae don’t harm the animals in any way and are, in fact, extremely important! 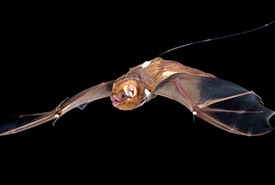 These devices allow us to study the bat’s movements, either by identifying them or through telemetry, which is a way to track them through the radio transmitter on their back. The information collected allows us to learn a lot about the movement habits and migrations of several species and, as a result, to better protect them.

The Motus tracking system is the largest telemetry network in the world and provides essential information on the movements of bats, birds and even some insects! 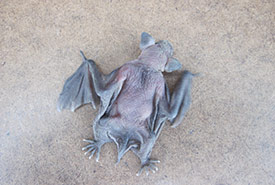 I have one last thing to share with you : this image of a baby bat! It’s not every day that you see a tiny hairless baby bat, since they’re usually clinging tightly to their mother’s belly at this age. Gestation takes place in spring, after they emerge from hibernation. Bats are mammals, so the babies drink their mother’s milk for a while before they start eating insects. You heard that right: bat milk!

If you want to help this unique animal, please share the videos and talk about these adorable little misunderstood creatures. They are the only flying mammals in the world and they provide us with essential benefits — despite the many myths “haunting” them!