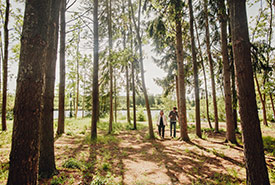 The health benefits of time in nature, once the stuff of folk wisdom, are now the subject of medical interest. (Photo by Taylor Roades)

For the sake of a healthy and sustainable future, time in nature is essential. Doctors now have the research to prove it.

It was too cold even for insects. The glassy surface of Lake Superior faithfully reflected a ruby sky as the sun rose over Ontario’s Pancake Bay Provincial Park, crisp beams of light cutting through the branches of old-growth maple, birch, oak, spruce and pine. The mist burned away, and birdsong swelled to fill the open chambers of this lakeside wood. I was alone.

A week on the road, living out of my car and hastily erected tents, had me wound pretty tight, but here I felt calm for the first time in days, even exultant.

While I wasn’t aware of it in the moment, the natural cathedral in which I stood was orchestrating profound changes in me, lowering my blood pressure and heart rate, and stemming the flow of the stress hormone cortisol. My anxieties, tribulations and ruminations were dissipating while feelings of happiness, curiosity, vitality and awe were welling up. 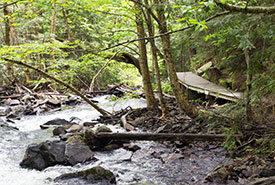 The natural cathedral in which I stood was orchestrating profound changes in me. (Photo by Zack Metcalfe)

The health benefits of time in nature, once the stuff of folk wisdom, are now the subject of medical interest. Among children, regular doses of nature have the long-term benefits of improved self-esteem, vision, body weight, attention and overall academic performance. In surgical recovery rooms, patients with windows overlooking greenery are less dependent on painkillers. Having 10 more trees on your city block improves self-perceived health, equivalent to being seven years younger, or $10,000 a year richer.

These findings and others are no longer theoretical, speaking to a phenomenon as powerful as it is mysterious.

Lisa Nisbet, associate professor at Trent University’s department of psychology in Ontario, has focused her career on this subject. While we walked the edge of campus in early June, she expounded on the benefits of even 15 minutes in natural settings.

Nisbet’s research has focused on how time in nature influences our treatment of nature, examining what she calls nature relatedness. In simple terms, nature relatedness is how much a person appreciates nature as a whole — not just the cute or scenic parts — and to what extent they understand the complex relationships tying it all together. Holding swamps and sunny beaches in equal regard for their unique diversity means you’re on the right track. Regarding yourself as a small piece of an enormous ecological puzzle, better still. 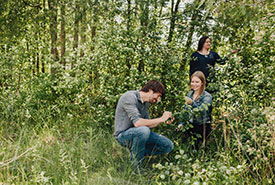 Students at Trent University explore the school's natural areas and conduct research on the benefits of time in nature. (Photo by Taylor Roades)

To determine a person’s level of relatedness, Nisbet and her colleagues established the Nature Relatedness Scale: a test of 21 items, which gives a score between 1 and 5, with 1 representing poor nature relatedness. To date, this scale has been translated into over a dozen languages, adopted by a number of environmental organizations (including the Nature Conservancy of Canada [NCC] with its Nature Quiz program – naturequiz.ca), and applied to over 10,000 people, from office workers to conservation professionals. The average Canadian scores around three on the Nature Relatedness Scale.

“It’s very difficult for the average person to be an environmental citizen unless they have an intrinsic motivation to protect nature,” she explains. “If you don’t see or understand the consequences of pouring paint down the drain or putting pesticides on your lawn, you’re just not going to take the appropriate action.”

“We need to make nature a habit,” she adds.

Ten years ago, Dr. Melissa Lem wrote her first prescription for nature to a young man battling attention deficit disorder. She was confident in the demonstrated benefits but was still hesitant to prescribe something so radically new, fearing it would sound “crunchy granola.” All the same, it was well-received.

Since then, she’s become an advocate for nature prescriptions, championing them at conferences, during guided tours through the provincial parks of BC and in her family medicine practice. Lem prescribes time in nature for depression, stress, attention disorders, even concussions; 30 minutes a pop, two hours a week, minimum.

“We all know that when we go out into nature, we feel calmer, less stressed, happier, but now we have numbers to back these feelings up,” she says. 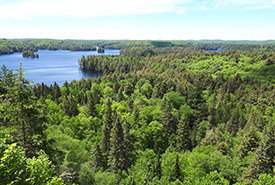 “We all know that when we go out into nature, we feel calmer, less stressed, happier, but now we have numbers to back these feelings up." (Photo by Zack Metcalfe)

Lem sits on the board of the Canadian Association of Physicians for the Environment (cape.ca), an organization whose mission is to better human health through environmental protection. It’s thanks to doctors such as Lem that such things will eventually find their way into medical textbooks, and that green prescriptions will become commonplace in medical clinics.

“Doctors and nurses are consistently rated among the five most trusted professionals in Canada,” Lem says. “When we say something, patients listen. If we could get health professionals to mobilize and prescribe nature more frequently, I think that would be quite powerful.”

Just such an endeavour is brewing at the South Georgian Bay Community Health Centre, near Wasaga Beach, Ontario. Ruth McArthur is a nurse with the District Health Authority and board member of the Wasaga Beach Healthy Community Network, the group ultimately responsible for crafting these prescriptions. McArthur says the size and scope of the program is funding-dependent, but she and her colleagues expect to be able to write their first prescriptions sometime this fall.

As they have thus far been imagined, these prescriptions will come hand-in-hand with maps of accessible parks near Wasaga Beach, and perhaps park passes from Ontario Parks (who is a partner with the health network). The group hopes to raise awareness among health centre clients and other health care practitioners about the benefits of spending time in nature.

In July, I met Tyler Coady, a young man of 33, strong and very well-spoken, who greeted me with a joke and a smile in downtown Charlottetown, PEI. Coady suffers from post-traumatic stress disorder (PTSD) — the consequence of a roadside bomb he encountered during his military service in Afghanistan.

“One of the things I missed the most being overseas was green space,” says Coady.

“PTSD disrupts pretty well every aspect of your life,” he explains. It’s plagued him with unwelcome flashbacks and constant, crippling anxiety. Coady initially withdrew from society. Counseling, medication and peer support were integral to his ongoing recovery, but so was his purchase of a small farm and regular hikes through its wilder corners. 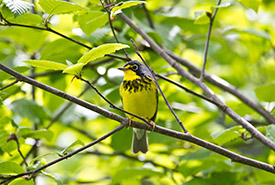 While in busy areas, Coady must actively suppress his PTSD symptoms. When he’s in nature, however, staying calm is no work at all. Whatever hold nature has on the human mind, it’s especially pronounced in people like Coady. Making use of a master’s degree in military psychology, he’s been coordinating peer support groups for other Island veterans with mental injuries, helping them find peace in nature.

The Island Nature Trust, a valued NCC partner, is among the oldest private land trusts in Canada, protecting over 1,600 hectares (over 4,000 acres) of PEI wilderness since its founding in 1979. Recognizing the special need among veterans for nature, they offered Coady the use of their largest protected area — replete with forests, wetlands, trails and old access roads for those struggling with mobility.

“There is broad recognition now that we’re only going to protect what we love. Trying to compartmentalize people and the rest of nature doesn’t work,” says Megan Harris, executive director of the Island Nature Trust. “We are not separate from nature, and there are things we need in nature. Those needs are sometimes compounded when our minds have been tested in the extreme, as with veterans.”

For its part, NCC has created a number of programs to increase the connections between people and nature. Its Conservation Volunteers program empowers Canadians to participate in hands-on conservation, restoration and research on their properties across the country. NCC also has close to 40 Nature Destinations (naturedestinations.ca), which offer access to a suite of properties ready to receive the eager hiker, amateur birder or nature novice.

“We’re pleased to share these select sites to help Canadians experience and connect with nature,” said Erica Thompson, NCC’s director of engagement. “The ‘great outdoors’ brings families and friends together, and can provide a greater personal appreciation of nature and the importance of caring for these special places. My recent visit to the Gaspé Peninsula, Quebec, including NCC’s Nature Destination at Pointe Saint-Pierre, reconfirmed to me the importance of spending time in nature, unplugging from all devices and celebrating the curiosity and inspiration that comes from time well-spent outside.”

NCC is encouraging people to explore its Nature Destinations, both on the ground and online, in all 10 provinces. Visitors can experience a variety of activities, including hiking, walking, canoeing, kayaking, photography and wildlife appreciation. From Victoria to St. John’s, there are a blend of natural areas that are accessible in both urban and rural areas for people to take advantage of. 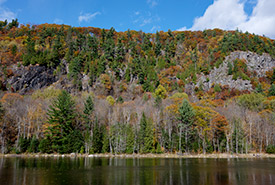 NCC has several goals with its Nature Destinations program. It hopes to get people outside so they can enjoy the physical and mental health benefits of being active in nature. NCC also hopes that people will gain an appreciation for the ecological benefits that nature offers, such as clean air and water, and the importance of conserving nature for future generations.

From indoor enthusiasts to nature lovers and everyone in between, NCC wants to make the outdoors more accessible to people. In preparation for going to one of the Nature Destinations, people are also encouraged to visit naturequiz.ca and take the six-question online Nature Quiz and receive a Nature Score, which will show how connected they are to nature. Once people receive their Nature Score, they can sign up for a virtual Nature Coach, and receive email tips for a happier, healthier life by incorporating time in the outdoors.

Thompson is also a member of #NatureForAll Canada, an initiative of the International Union for Conservation of Nature, aimed at reconnecting humans with what remains of our natural heritage. The Canadian chapter is a young but growing coalition of NGOs, government departments, academics and of course NCC, bringing a diversity of disciplines to bear on this campaign of reconnection.

The separation of human beings from nature has done monumental harm to mind, body and biodiversity; a point made only too clear by the people in this article. For the sake of a healthy and sustainable future, through these programs and others, finding ways to pursue nature is not just helping nature, it’s helping ourselves. Since that early morning in Pancake Bay Provincial Park, I find myself more likely to reach for hiking shoes than for Aspirin, and far less willing to spend a beautiful day indoors.

This story first appeared in the fall 2019 issue of the Nature Conservancy of Canada Magazine. Donors who contribute at least $25 or more per year will receive four issues of the magazine. Click here to donate today and start receiving the magazine.