www.natureconservancy.ca > Home > Who We Are > Publications > Magazine > Fall 2021 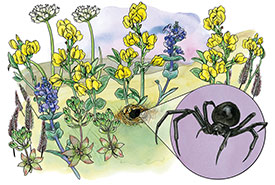 I have been fortunate to spend a lot of time both at work and at play in the southern parts of the Prairie provinces. In 2011, a safety briefing at the Canadian Forces Base Suffield near Medicine Hat, Alberta, reminded me that, while not abundant, black widow spiders are residents of the mixed-grass prairies in Canada.

I’ve never been a huge fan of spiders, but I do have a habit of checking old burrows for signs of new tenants. Despite this, I have never found a black widow spider during a site visit. That is, until June 2020 when I was completing the baseline inventory for the Nature Conservancy
of Canada’s (NCC’s) Zen-Ridge property in southwest Saskatchewan. As I was walking along, inspecting the old badger burrows, I remember thinking to myself that most of the burrows I was seeing had spiderwebs growing over the entrances; a sign that nothing had entered or exited the burrow recently. Approaching another burrow, I noticed a large, black spider inside the burrow. Had I approached the burrow entrance from a different angle, I probably wouldn’t have been able to see it. It was tucked back about 20 to 25 centimetres on the side of the entrance and sitting on top of a large, white egg mass. Having seen some interesting spiders out on the prairie before, I kneeled down to get a better look at this one.

Seeing my movement, the spider was startled and retreated deeper into the burrow. As the female scrambled to safety, I got a very clear view of a red, hourglass-shaped marking on the underside of her abdomen. This immediately narrowed down the list of potential species ID to
a single species: the western black widow spider.  As I continued on with the baseline inventory field work over the course of the next few days, I could not help but continue to look for more black widows. Between my colleague and I, we observed a total of seven, all of which had egg masses. It’s easy to focus on the birds, mammals, other wildlife and even the plants that benefit from protected areas like the Zen-Ridge property. But this experience served as a great reminder to me that there are many other smaller, less charismatic species that benefit as well — they may just not be as visible to the naked eye, until you stop  and look for them. Even though they might be a little creepy-crawly or scary, western black widow spiders are a reminder that biodiversity isn’t and shouldn’t be about playing favourites.

This story originally appeared in the fall 2021 issue of the Nature Conservancy of Canada Magazine. To learn more about how you can receive the magazine, click here.