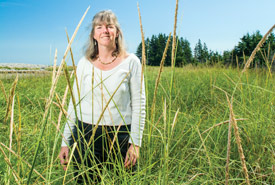 By Sandra Phinney, writer and photographer

Danielle Robertson has had a love affair with nature in general, and Port Joli, Nova Scotia in particular, for as long as she can remember. Her roots run deep, as do those of her husband, Charles. The land they live on in Port Joli, nestled along Nova Scotia’s South Shore , has been in the family since 1786, when early settlers fished and farmed here.

“You can still see old fence posts that were used to build staging and platforms on the coastal marsh where they stored the hay,” says Robertson.

Yet the places their ancestors knew and cared for over generations are increasingly under threat from a number of sources, including the encroachment of invasive species such as European green crab, resource extraction, conversion for human use, habitat loss and climate change. Given that Canada has the longest coastline in the world, it comes as no surprise that the potential impacts of this latter threat on our coastal ecosystems and coastal communities are staggering.

One of the ways to safeguard these places, for the people and species that live in them, is for conservation organizations like the Nature Conservancy of Canada (NCC) to work with people on the ground at the grassroots level, in their communities. Support from local champions like Danielle Robertson and her family – people who are innately tied to the land and its history - is critical in helping ensure a future for these coastal landscapes.

Robertson has spent decades digging her roots deeper, getting to know the natural and human history of Port Joli. Shortly after graduating from Mount Saint Vincent University in 1989, Robertson was hired to do research for the nearby Thomas Raddall Provincial Park, which further fuelled her passion for the region. In the process, she discovered several Mi’kmaw clam middens (areas where First Nations would dispose of clam shells after harvesting them): evidence of a rich human history dating back thousands of years.

“I got obsessed with the sites,” she says, “and I also got serious about conservation.”

Robertson was proud  that Port Joli and neighbouring Port L’Hebert has four parks, a nature reserve and three bird sanctuaries  that are protected from development and managed by national and provincial bodies; signs of the area’s natural and cultural significance. Yet she often thought how wonderful it would be for her family and future generations if even more land in the region could be protected from extensive housing developments, quarries and clear cutting.

Thirteen years ago, she and Charles contacted NCC. Would the organization be interested in buying a piece of property if they donated a parcel? Shortly after opening the door, Robertson also provided contact information to NCC staff for other landowners in hopes that, down the road, NCC could help secure other lands in the area. And that’s exactly what has transpired.

Craig Smith, Nova Scotia program director with NCC, says that a number of factors influence whether the land conservation organization pursues work in a natural area or not. 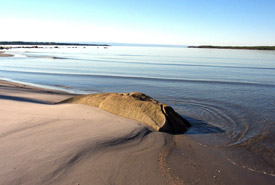 “One of them is: do you have local champions? When the Robertsons placed the call to us, it happened to coincide with NCC completing a survey of this region.” NCC’s research had identified southwest Nova Scotia as one of the areas that stood out as being particularly ecologically important because of its forests, diversity and rich coastal habitats.

Another of the many special features of the area is that mainland moose living in the Tobeatic Wilderness Area migrate to the Port Joli peninsula in the summer — perhaps for the cooler climate and for the salt content of the coastal marshes. Also, this region is part of the South Shore (Port Joli sector) Important Bird Area, which provides important for migrating shorebirds and waterfowl, and nesting habitat for the endangered piping plover.

“Property owners like Danielle can be extremely helpful to bridge the divide and create a more nuanced understanding among other landowners about who we are and what we do,” Smith says.

That knowledge of NCC came in handy when Robertson approached a neighbouring landowner, Dirk van Loon, who had moved to the area from the United States in 1969. He and his wife bought an old farm in Port Joli, where he homesteaded, wrote books and started a magazine. 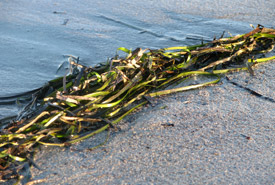 “Where I grew up back in the U.S. is now all developed. There is no wilderness there anymore,” says van Loon. “So it’s getting more and more important that Canada be the kind of country that protects the flora and fauna, and where you can go out into the wild and explore.”

Several years ago, van Loon and two other landowners partnered to acquire 73 hectares (180 acres) on Sandy Bay Beach, also located in Port Joli. Eventually van Loon’s son inherited his father’s portion of that land; his son and the other two property owners have since worked out an arrangement with NCC. In 2015, van Loon sold a substantial piece of his own holdings in the same region to NCC.

The lands around Sandy Bay Beach have rich forests, rare lichens and lots of wildlife. “I blame Danielle Robertson for getting us involved,” van Loon jokes. “She opened the door to working with NCC.”

Now, NCC protects 658 hectares (1,627 acres) in Port Joli and its surrounding region, thanks to landowners such as the Robertsons and van Loon, who know the land they live on is a special place.

It’s now clear that this understanding of the area’s ecological richness was shared by First Nations communities that lived here thousands of years ago. Port Joli was a cultural landscape, where people expressed their ideologies and customs as well as made a living.

“In Port Joli, we've found hard evidence that because the place was an ecological node (a place of special ecological diversity and productivity), says Matthew Betts, curator, Atlantic Provinces Archaeology with the Canadian Museum of History. “The Mi'kmaq lived on the coast all year round, as opposed to the traditional model of spending winters in the interior and summers on the coast.”

In Nova Scotia, where 90 per cent of the coastline is privately owned, these local connections with people who know the land are ever more important if these special places are to be protected. As NCC continues to conserve lands and waters across the country, working with people on the ground who have deep roots, like the Robertsons and van Loons, provides an excellent model of what can be done if Canadians work together.

This story was written by Sandra Phinney and originally appeared in the Spring 2017 issue of the Nature Conservancy of Canada Magazine. To learn more about how you can receive the magazine, click here.