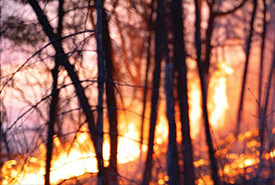 By Susan Peters, writer and editor

The paradox of fire: How something so destructive can benefit the landscape.

Standing over the flames with shovels and backpack sprayers of water, ready to stamp out stray embers, the burn crew watches the fire they’ve set. “Especially when it’s a boring burn, it’s fun,” says Julie Sveinson Pelc, the incident commander in charge of the fire. “Boring means we’re standing and looking at fire. It means things are going exactly as they should,” she explains as, during a COVID-19 surge in the height of winter, she shows photos of a planned burn that happened last September at the Tall Grass Prairie Preserve in southeastern Manitoba, where the scent of burning grasses can resemble essential oils.

Although North America has a recent history of fire suppression, fire was used to manage landscapes for thousands of years prior to European settlement. For several decades, Nature Conservancy of Canada (NCC) staff have been bringing back fire in an intentional way to manage the organization’s conservation lands, from BC to Saskatchewan and Manitoba, and even the grasslands of Ontario. Particularly in prairie regions, the plants and animals we have today — and the ones we want for tomorrow, too — evolved to thrive in an ecosystem that experienced regular disturbances, such as grazing, burning, flooding and drought.

With 20 years of burn experience, Pelc, who manages NCC’s stewardship program in Manitoba, can debate the merits of a light, surface burn versus a high-intensity fire: “It can boil the trees: you can see the fluids bubbling.” The fire was intended to contribute to the ongoing restoration of a 20-hectare area of grassland that is prime habitat for endangered monarch butterflies. It removed willows and other woody shrubs that were growing in the grasses and that would turn the wide, open land into a woods of aspen and bur oak, if left unchecked. Fires burn dry grasses and leaves, returning those nutrients to the soil and leaving the earth open for rain to sink in. Burning the area that had previously been seeded will grow more of the plants that feed monarch butterfly caterpillars and adults. 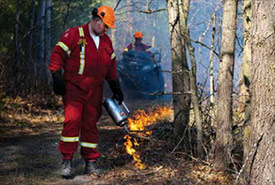 These fires are set with a “prescription” to burn, meaning professionally managed, intentionally set fires that burn in a pre-determined area, under strictly controlled circumstances for the sole purpose of restoring natural habitat (a different kind of burn happens in agriculture when farmers burn crop stubble after harvest). Planning for prescribed burns involves consulting a decision-making tool called the Multiple Species at Risk Recovery, Management and Research (Multi-SAR) plan to determine the best time of year to burn to support a species, such as endangered prairie white-fringed orchids or Poweshiek skipperling butterflies. It means assessing the dryness on the ground, relative humidity, wind and temperature, getting burn permits from the municipality or province, and doing outreach to fire departments and neighbours who might have concerns that an out-of-control fire could destroy their homes or ranches.

When NCC undertakes prescribed burns, they’re usually done to decrease dry plant litter build-up and prevent woody tree species from overtaking a prairie or grassy area, as at the Tall Grass Prairie Preserve, although there are also plans to use fire to clear the understory in open forests like those at the Darkwoods Conservation Area in BC. Across North America, controlled burns are managed by federal and provincial parks services, Indigenous communities and municipalities, sometimes to prevent out-of-control forest fires. “When fuel loads build up, the fires can be hotter, cover bigger areas — it can be devastating. Some groups burn to avoid the risk of catastrophic fire, to make sure humans aren’t at risk,” says Sam Knight, NCC’s Weston Family Science Program manager, and also a conservation biologist who manages the organization’s national conservation research program. “A lot of ecosystems are adapted to fire and need disturbances, like grazing and fire, to be maintained.”

The September burn in Manitoba saw the crew of 10 workers on a mowed fire guard of grass in a large square lay a trail of water along the fire lines. They then used specialized drip torches to light the burn line, creating a triple line of defense against a fire escaping their control. “People like to brag about how straight their burn lines are,” Pelc shrugs, but she’s proud of how the crew of new and experienced NCC staff in personal protective equipment, such as leather boots and gloves, fire suits, masks and safety glasses, moves in slow and unhurried cooperation to complete the backing burn line against the wind, before the head fire is lit with the wind to dramatically sweep across the centre of the section.

This is an excerpt of a story that first appeared in the Spring 2022 issue of the Nature Conservancy of Canada Magazine. Donors who contribute at least $25 or more per year will receive the magazine. Click here to donate today and start receiving the magazine.