www.natureconservancy.ca > Home > Who We Are > Publications > Magazine > Summer 2018

Taking in the view 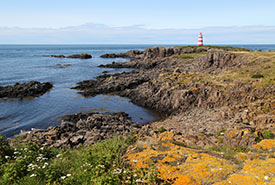 It’s not a quick trip, no matter where you leave from, but Brier Island (population 200) is worth the journey. Perched on the westernmost point of Nova Scotia, Brier Island is one of the top destinations in Atlantic Canada for nature lovers. The property is two ferry rides from the mainland and a four-hour drive from Halifax. In summer, the island is a whale watching hot spot. Popular boat tours take visitors out to see humpback, finback and minke whales feeding and frolicking in the rich waters of the Bay of Fundy, known for the world’s highest tides. 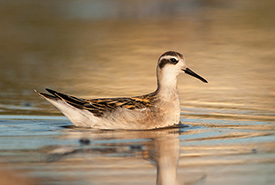 Brier Island is also famous for its diversity of birds: more than 300 species have been identified at this globally significant Important Bird Area, due to the island’s prime location on the Atlantic Flyway. Brier Island is one of the most important locations in North America for sea birds such as phalaropes — both the red and red-necked species of this shorebird. Shearwaters, gannets, razorbills, puffins and kittiwakes are also common. In the fall, thousands of hawks migrate through the area.

Views for the ages

All this bird and marine life makes for an unforgettable hiking spot. NCC has protected 490 hectares (1,200 acres) on Brier Island. This is equivalent to about one-third of the island. NCC’s nature reserve includes a four-kilometre linear hiking trail along the island’s spectacular, rocky south coast. Make your way along cobble beaches, across low, rocky cliffs and over boardwalk-covered bogs. Vertical rock columns of basalt, formed by ancient lava flows, add another layer to this complex and stunning Atlantic coastline. Western Light — one of three lighthouses on Brier Island — can be seen from the trail. Near Westport, at Southern Point, there is a memorial to Joshua Slocum. Slocum spent his boyhood on Brier Island. In the 1890s, he became the first person to sail alone around the world.

For the last several years in late August, NCC has hosted a community BBQ, nature talk and Conservation Volunteers beach cleanup on Brier Island. NCC is also involved in a multi-partner project to restore the island’s largest bog, which provides habitat for the globally rare eastern mountain avens. This species is an endangered flowering plant that is found only in this corner of Nova Scotia and in New Hampshire. Mid- to late summer is often the least foggy time of year on Brier Island and offers the best weather for hiking and birding.

Take Highway 217 west toward East Ferry on Digby Neck. Take the five- to 10-minute ferry ride to Tiverton on Long Island. Note: The ferry leaves once an hour, can hold 15 cars and is cash only. Continue on the 217 to Freeport and take a second five- to 10-minute ferry to Westport on Brier Island. The NCC coastal trail can be accessed from the parking lots at the end of Gull Rock Road or Lighthouse Road. The island is about one hour and 45 minutes from Digby and about four hours from Halifax.