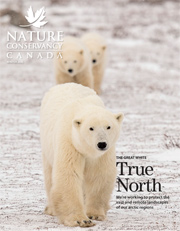 Coming January 11: Stories about Canada's winter warriors, how one woman draws the connection between art and nature, what Survivorman Les Stroud packs in his backpack to go on adventures...and more!

Learn about how four species brave the Canadian winter.

Feature
NCC's participation in a groundbreaking project is putting Canada's North on the map.

Force for Nature
Teva Harrison, author of the acclaimed graphic novel In-Between Days, discusses her connection with nature through art during her battle with cancer.

Close Encounters
NCC's Emily Little recalls the time she and a colleague learned just how fast a badger can run.

The Nature Conservancy of Canada Magazine is distributed to donors and supporters of NCC.