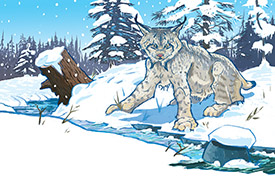 The lynx stared me straight in the eyes, then quickly bounded up a steep slope to disappear into the forest. Lasting just a few seconds, this brief encounter piqued my curiosity about an animal so well adapted to harsh winters and a snowy environment.

In 2003, while working with the Nature Conservancy of Canada (NCC) to help protect the Barachois of Malbaie coastal watershed, I would stroll the banks of Rivière aux Émeraudes, along the Gaspé Peninsula, named for its clear, emerald blue waters. I was following the river’s many bends one day, when out jumped the lynx from a small logjam. Sensing a human presence, it froze in place for an instant and then vanished.

In the wild, it is far more likely for this stealthy animal to observe you than for you to catch a glimpse of it.

A few years later, I learned that the Gaspé Peninsula has a source population of lynx. A source population is one that is healthy enough that individuals leave the area to find new territories. The abundance of food is certainly an important factor in the lynx’s distribution. However, it quickly flees at any signs of human activity, such as light, odours and noise.

In studying the species, scientists have specifically noted that protected areas, especially in southern Quebec, are not adequately meeting the animal’s habitat needs. If we hope to ensure the long-term viability of lynx, current protected areas and the surrounding Appalachian forests must be maintained and interconnected by wildlife corridors. Known as connectivity, this concept is increasingly emphasized by conservation science.

NCC and its partners have identified key areas requiring protection and have prioritized conservation activities for those sections of the Appalachians. The Gaspé Peninsula still has enough natural cover to support animals that need to have a large home range. If they are to survive and benefit from a thriving genetic pool, lynx must be able to move freely throughout their home range. Local communities and scientists working regionally in the Appalachians have developed a plan to maintain connectivity for wildlife between this protected area, such as the Forillon National Park and the rest of the Gaspé Peninsula.

Connectivity in this region is now becoming a reality. NCC has secured 600 hectares (1,483 acres) of habitat in the Gaspé, including key properties beside protected areas, providing the ecological connectivity required by lynx. Major efforts have also begun in the core region known as “the three borders,” between Quebec, New Brunswick and Maine. Further south, the Appalachians bordering the U.S. are receiving greater protection, but more work remains to be done. If we want to keep wildlife that needs large home ranges, we need to ensure their habitats are protected and connected. NCC is working on connectivity projects across Canada to conserve and restore wildlife corridors. This is great news for Canada lynx!

This story was written by Hubert Pelletier and originally appeared in the Winter 2018 issue of the Nature Conservancy of Canada Magazine. To learn more about how you can receive the magazine, click here.